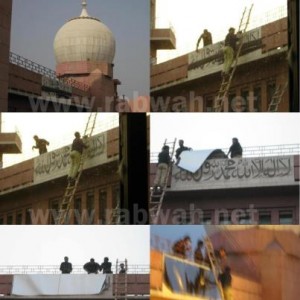 Just when it seems that the boundary of idiocy cannot be pushed any further, Punjab police has proved us wrong. There are recent reports that an Ahmadi “place of worship” in Sultanpura, Lahore was damaged by policemen to fulfill the demands of local religious clerics. The offense which the Ahmadi “place of worship” had caused was the public display of Kalima in the premise. Apparently, the Islamic creed “There is no God but Allah, Muhammad (pbuh) is the Messenger of Allah” deeply hurt the sentiments of zealous Muslims. To prevent trouble, Punjab Police imposed Section 44 in the area and erased the Kalima themselves.

Perhaps, our police saw this as only the latest attempt by the “infidels” to pose as faithful and thus hurt Islam and Pakistan. Already hundreds of Ahmadis are jailed or are under trial for the offense of “posing as Muslims” as per General Zia’s Ordinance XX.

In the Zaheeruddin vs State case (1993), our courts struck down the petition that the state should not prevent Ahmadis from using Islamic terms as per their beliefs. Essentially, our honorable courts argued that religion is like a trademark which cannot be misused by an unauthorized party. The implication of this argument is that Islam is basically a copyright product owned by the mullahs and which is protected through laws enforced by the state. Thus, the logic is that just as an Indian film on a DVD cannot be duplicated by unauthorized dealers, likewise the copyright piracy of Islam by Ahmadis is also unacceptable.

This kind of logic is the law in Pakistan. Thus, when mullahs get inflamed by the violations of Ordinance XX by Ahmadis, we cannot blame them. But you can rest assured that had the Kalima display been removed from any other mosque, this act would have amounted to supreme blasphemy in the sight of our chest-thumping men of faith. They would have demanded nothing but the death penalty for the outrage. However, the dimwits do not realize that this is same Kalima which, in their view, was used as a slogan to achieve Pakistan. So much for “Pakistan ka matlab kiya la Ilaha Ilallah”

Let us also be assured that the people accused of blasphemy under 295-C have never committed any blasphemy even remotely resembling this act committed by our police. While we cannot blame mullahs for just being themselves we may, instead, lament about the wits of our Police and the Punjab political administration. Perhaps they think that all the grave internal and external dangers Pakistan faces today pale in comparison to this gravest threat from the Kalima. Perhaps they have issues of political expedience and of avoiding adverse reactions.

Whatever the case but it seems that Divine Intervention and sustained political action can hammer sense into their heads.