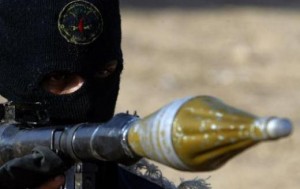 THE WORD jihad is perhaps one of the top 10 most feared words in the West. The same word also perhaps makes it to the top 10 most ill-understood concepts among Muslims and others alike.

It is well known that Muslims, Christians and Jews coexisted in Jerusalem for ages. With the spread of a theocratic interpretation of religion and with widespread illiteracy and ignorance across much of the Muslim world, however, almost all Muslim sects over a century ago had come to hold the belief that jihad meant “holy war” — that waging such a war on infidels was an obligation of the faithful Muslim.

The killing of an unbeliever was jihad, and such an act entitled the perpetrator to paradise. Important as it was to the Muslims, jihad was referred to as the “sixth pillar of Islam” by many Sunni scholars, and Shia Muslims incorporated it in the 10 ancillaries of faith.

Anyone who dared disagree with this definition was deemed an infidel. At the end of the 19th century, Ghulam Ahmad Mirza, the founder of the Ahmadiyya Muslim Community, endured the same branding when he declared that the doctrine of jihad as understood by the orthodox clerics was opposed to the true principles of Islam.

What exactly is the true concept of jihad?

Jihad is an Arabic word which literally means struggle. It has been used multiple times in Islamic scripture. To strive is not synonymous with fighting. In the Quran, the word for fighting is qitaal. Muhammad did fight wars. However, all without exception were defensive wars.

Muhammad was averse to fighting in the 13 years he and his followers were tortured in Mecca. It was not until Muhammad migrated to Medina and heard of the Meccans planning to wage war on Medina that divine permission to fight was granted. It was a last resort to prevent innocent bloodshed in Medina and to defend the peaceful propagation of Islam.

Indeed, such fighting is a struggle. But so is spending out of one’s wealth for the poor and needy. So is fighting against one’s inner temptations. So is refusing to be slave of one’s inner self and rise in moral strength. So is working hard and doing good to fellow men. Why then should the word jihad be limited to fighting alone?

The only time fighting is allowed in Islam is in defense, when an enemy launches an uncalled offensive. Fighting is the last option in such a case and is only to be used to protect religion and one’s own life in extreme situations of persecution. In a country like the United States, for instance, where Muslims live in peace and practice faith freely, the very thought of a violent jihad on its soil is disgusting at the very least and totally against Islam itself.

This, with the fact that no offensive act is remotely allowed in Islam, makes the orthodox stand on jihad all the more funny. Islam emphasizes the extraordinary importance of human life. The Quran says: “Whosoever killeth a human being for other than manslaughter or corruption in the earth, it shall be as if he had killed all mankind, and whoso saveth the life of one, it shall be as if he had saved the life of all mankind.”

What used to be a prime identity of the faithful is itself becoming a mark of infidelity. Knowingly or unknowingly, the interpretation of Ahmad is spreading across hearts and souls. This said, the ever more frustrated jihadis are ever more desperate in their own circles.

The jihad of the fanatics is a concoction of their misguided power-hungry masters. It has no basis from the teachings of Islam.