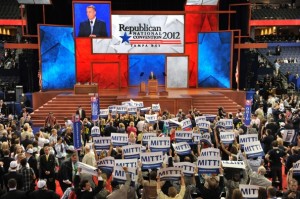 The straw man of the famous post-Sept. 11 slogan, “Not every Muslim is a terrorist but every terrorist is a Muslim” was debunked by a 2005 FBI report.

It showed that only 6 percent of terrorist attacks on U.S. soil from 1980 to 2005 were carried out by extremists calling themselves Muslims. But one group has sustained the Islamophobic rhetoric, nonetheless.

So I wonder if Muslims would rally outside the Republican National Convention this week carrying a banner stating, “Not all Republicans are Islamophobes but all Islamophobes are Republicans.” Trust me. The data supports it.

A new poll conducted by the Arab American Institute asked the attitudes of voters, analyzed along party lines, towards different religious groups, including Arabs and Muslims. Overall, 57 percent of the Republican voters viewed all Muslims unfavorably in comparison to 29 percent of Democrats who expressed a similar opinion. When it came to American Muslims, 47 percent of Republicans, in contrast with 23 percent of Democrats, held an unfavorable view.

Islamophobia in America is not innate, rather it’s the fruit of a decade-long hysteria against Muslims generated by a largely Republican machine comprised of pundits, conservative funders, media conglomerates and fiery politicians.

By pundits, I mean the likes of lawyer/political commentator Ann Coulter who boldly asked Muslims to “take a camel” instead of flying on a plane and talk show host Sean Hannity who compared Islam with Nazism. Others such as media personality Glenn Beck, Middle East Forum PresidentDaniel Pipes, televangelist Pat Robertson, Jihad Watchdirector Robert Spencer, and activist Pamela Gellerr also mesmerized millions with their imagery of the Muslim terrorist next door.

Then comes the funding component. Fear Inc., a 2011 report by theCenter for American Progress, showed that seven conservative charitable groups provided $42.6 million to Islamophobic think-tanks between 2001 and 2009. This fear is then packed and loaded, not on camel backs, but on the airwaves such as the Rush Limbaugh Showand the Savage Nation as well as a plethora of Web sites, blogs, forums, and chain e-mails.

Republican politicians such as Minnesota congresswoman Michelle Bachmann and New York congressman Peter King and almost every Republican presidential candidate in the 2012 primaries save Ron Paul, are then given the megaphone to add trust to this fear mongering. But here is the rub: According to Gallup, 90 percent of Americans don’t even trust these politicians.

You can’t help but wonder: Why is it that nearly all Islamophobes are Republicans? Probably some “data girl” – as Carl Rove calls one of his staff members – in a cubicle reckoned that the American Muslim vote bank is better bashed, than embraced.

The theory is simple. Muslim youth? Tell them to take a camel. Muslim communities? Link them with creeping shariah. Muslim congressmen? Question their loyalty. Do it consistently and it will galvanize the conservative base.

In a tight race, such analysis is fractured and flawed. A 2010 Pew Report estimated that nearly 2.6 million Muslims live in the United States, with Ohio, Michigan, and Virginia among the top ten states with the largest Muslim populations. An en bloc Muslim vote, therefore, could have a huge impact in these swing states. Just look at the 2012 presidential elections in France where 93 percent of French Muslims voted for François Hollande, enabling him to beat Nicolas Sarkozy. By securing 96 percent of Black voter support, President Obama did the same in 2008.

So the 2012 Republican voices should stop telling me to “take a camel” and worry instead about the American Muslim vote – united against them. Who knows? It might prove to be the straw that breaks the camel’s back.

So what’s Timothy Mcveigh, then? And those people that shot up their schools. What they did was terrorism, what did it look like they were doing, using guns as a substitute for the school bell, or testing out a new fire drill? Then we have the guy at the Holocaust Museum, he shot a security guard for God’s sake! And let’s not forget the shooting at the World Trade Center. And then there’s the Sixh Temple shooting. What do you make of that?
Are you going to turn them magically into Muslims so you can disown them?

Ok lets be real and let’s be politically incorrect at least we are dealing with facts.
Firstly, muslim terrorist acts since 911 around the world currently stand at 19565 – that is a problem.
The acts you mention even if they were carried out by non muslims would account for not even 1% of all terrorist acts.
Muslims fight with everyone in the name of PEACE! Christians are persucuted/exucuted/forced to convert in majority muslim countries or must pay jizya a tax as they are not Muslims to be left alone.
Muslims can’t even get on with each other they kill each other.
No offence you guys are animals and treat non-muslims like animals.
I make no apologies: I am islamophobic – it means a fear of Islam and Muslims! I absolutely am afraid of you! I value my liberties and would lose most of them if I lived for example, in Egypt – Saudi Arabia.
So go and sing your fake beautiful tune to the politically correct Democrats.
You guys deserve nothing but contempt until you change your ways!

Did you not read the article where he said, “only 6 percent of terrorist attacks on U.S. soil from 1980 to 2005 were carried out by extremists calling themselves Muslims?” Perhaps you should read it again because it was written for individuals like you. The number you are referring to is from a global perspective and that number is actually close to 18000 (estimated) where even then it only accounts for 30% of the world terrorist acts from 1970 to 2007 according to the global terrorism database. They also marked Columbia, Peru, and El Salvador as being the top three when it comes to terrorism, all non-Muslim countries. Lastly, Since 2009, the FBI has said the “jihadist” terrorist acts have declined. Stop going to jihad watch and stop watching Fox News.

Ok so 40% of USA were by Muslims geez and the other 60% were they identified by a particular religion. The reason why there has been less in the USA [if you can’t figure it out] is because of USA intelligence!
How many potential terrorist attacks were stopped check out the link: http://en.wikipedia.org/wiki/List_of_foiled_Islamic_terrorist_plots_in_the_post-9/11_United_States
MOST ARE FROM ISLAMIC COUNTRIES OR HAVE LOVELY ISLAMIC NAMES SUCH AS:
Mohammed Mosharref Hossain/Shahawar Matin Siraj
so please don’t tell me lies!
more attacks would have occurred by MUSLIM’S if the government had not intervened. There should be cameras in all of your homes and mosques monitoring your every move!

First of all no one is lying here. Your paranoia is superseding your reasoning skills. We Ahmadi Muslims do not need to lie to get our point across.

The link you posted here does not give any numbers, statistics or anything else for that matter to support your claim. There are number of examples of terrorist acts or attempted terrorist acts by people who call themselves Muslims given but then again the whole page is titled to only highlight this and nothing else.

You are right about our (US) intelligence who I think have done a fantastic job in thwarting many nefarious attacks since 9/11.

Your point is still null and void by the mere fact that most terrorist ridden countries are non-Muslim in majority. No matter how many exclamation points you put after your statements this will not change because its a fact. Please go and see for your self at the global terrorism database website.

I would like to quote our former president who very truthfully said what this is all about the in the end, “This crusade, this war on terrorism is gonna take awhile.” For the religious right in this country this is us against them war and not what it is actually about, which is to fight for peace.

wrong – so many lies are being spread here and by muslims in general. Just look at whats happening in Egypt/Libia etc! Muslims can’t help themselves look at how they are reacting over a movie. If you don’t like the movie a) either don’t watch it or b) boycott the country.
Muslims can’t help themselves from storming embassies and killing people.
You treat non-muslims like animals because you behave like animals.

It appears you feel very passionate on this subject. I’m sure these atrocities done by Muslims take quite a toll on you personally. To be honest, they affect me personally as well. Seeing my brethren being oppressed by so called Muslim Nations, make me ill to my stomach.

If I may ask though…have you ever encountered a Muslim who did not wish you harm? Have you encountered any Muslims who wished for peace just as you do?

ive encountered Muslims but as you are aware I am an infidel. If you are being truthful as an infidel I should not be befriended. Have you read the Koran?

One more thing, since 9/11 there have been 10 deadly attacks on us soil and out of those only 4 were committed by people calling themselves as Muslims.

I don’t watch Fox news but thanks to Jihad watch and other websites I have learned that all Muslims practise Taquiya!
Why don’t you tell all non-muslims what that is????

PLEASE LET EVERYBODY KNOW WHAT Taqiyya is!