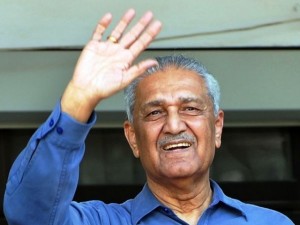 Consider this before buying your next Umra package: Jabbarsahib can grab your shoulder, beam you to the Kaaba from anywhere in the world, where you can offer prayers and return back home in no time.

The idea is laughable on many accounts. It rejects physical laws, discards scientific evidence, and makes a mockery of Islamic practices too. Add to the giggles that it was not an illiterate mullah, but Pakistan’s star scientist, AQ Khan, who made this assertion. Please watch the following video clip from 37:30 minute onwards.

(Original video removed from Youtube. This clip has the referenced comments at 0:27)

That’s where the laughter ends. Because, as you may have noticed in the video, his claim was preceded by a brazen attack against Ahmadis in the following words:

What? Is AQ Khan alleging that he is a patriot while Ahmadis are not loyal to Pakistan? Does he have data to support this absurd allegation or is he pulling just another ‘Jabbar sahib?’

Regardless, the crowd’s reaction to his hate mongering suggests that many have bought into this propaganda. Therefore it’s important to confront such vitriol against a beleaguered community.

That AQ Khan is an opportunistic businessman, not a diehard Pakistani fan, is the topic for a separate piece altogether. But first, consider the 80-year long record of the loyalty of Pakistani Ahmadis.

1930s: In 1932, when Mr Jinnah retreated to the UK in frustration over the second Round Table Conference, it was the Ahmadi Missionary in London, Abdur Raheem Dard, who persuaded him to return and fight for the Muslims of the subcontinent. The Sunday Times London (April 9, 1933) published a candid acknowledgment by Mr Jinnah:

“The eloquent persuasion of Imam left me no way of escape.”

Mr Khan, is this the disloyalty of which you accuse Ahmadis of?

1940s: Sardar Shaukat Hayat on page 147 of his book “The Nation That Lost Its Soul,” mentions an incidence where Quaid-e-Azam asked him to seek Ahmadis’ support for the Muslim League. The Ahmadiya khalifa, Mirza Bashirud-Din Mahmood, responded:

“Please convey to Quaid-e-Azam that we have been praying for his mission from the very beginning. Where the help of his followers is concerned, no Ahmadi will stand (in elections) against any Muslim Leaguer.”

Remember, Mr Khan, back then your beloved Mullahs – who pretend to be the poster children of Pakistan’s loyalty today– would call your country ‘Napakistan’.

1940s: At the request of the Pakistani government, Ahmadis formed a military unit called ‘Furqan Force‘ to support Pakistan in the First Kashmir War of 1948. Furthermore, this unit’s troops were drawn from the Ahmadiyya community – even its expenses were paid for by Ahmadis.

Mr Khan, please tell your audience that at that time, you and your family were loyal Indians, still living in Bhopal.

1950s: Even the critics of Islam considered Zafrullah Khan, an Ahmadi and Pakistan’s first foreign minister, ‘as important to Pakistan’s independence as Thomas Jefferson was to the emergence of the United States’. He not only represented Pakistan on the Kashmir dispute in the Security Council but also fought for the independence of other Muslim countries including Libya, Somalia, Eritrea, Sudan, Tunis, Morocco, Palestine and Indonesia during 1948-54.

Then why do the critics call you the Merchant of Menace, Mr Khan? )

Even the most talented Ahmadis are not promoted to higher ranks now. But they still serve in Pakistan’s army and they still give their lives in service.

1960– 70s: Mirza Muzaffar Ahmad, the grandson of the founder of Ahmadiyya Community, oversaw the signing of the Indus Basin Treaty and the procurement of development assistance from multilateral donors for the construction of Mangla Dam and Tarbela Dams as the Federal Finance Secretary. Years later, as executive director of the World Bank, he helped in the servicing and rescheduling of these loans after the dismemberment of Pakistan in 1971.

Okay. Making a dam is not as hot as making a bomb. You win on this one.

1970 – 80s: While Pakistan’s future leaders were dreaming of dual nationalities, Dr Abdus Salam,the first and only Pakistani Nobel Laureate, refused all offers to accept any foreign citizenship. He lived and died as a Pakistani, and was instrumental in helping 500 Pakistanis to study abroad.

Tell me, Mr Khan, weren’t you a naturalised citizen of Holland?

1990s: Despite persecution, millions of Ahmadis decided to keep their businesses in Pakistan. Their honest dealings were even inadvertently, acknowledged on the record.

You too, Mr Khan, operated your business of selling nuclear technology from Pakistan and your dishonest dealings are also on the record.

2000s: When was the last time an Ahmadi was responsible for Pakistan’s disgrace on a national or international level?

Really? Do you have any data to support your allegations of Ahmadiyya disloyalty? By the way, ‘Ahmadis are the agents of British or Jews’ is not factual data. It’s mudslinging.

2010s: The Ahmadiyya Khalifa, Mirza Masroor Ahmad, urged his community to offer a voluntary fast every week and two voluntary prayers (nafal) every day for the safety of Pakistan and its Ahmadi community.

Pakistan’s demagogues have effectively barred Ahmadis – no matter how learned they may be – from holding executive positions. But how will they bar them from praying for the safety and security of the country?

Mr AQ Khan, I maintain: All distinguished Ahmadis have helped improve Pakistan’s image on the international stage. Refuting this fact in a scholarly fashion will be hard for you as you admire phony miracles over real evidence. You resort to hateful speech instead of intelligent conversation.

Thanks, in part, to your hate mongering, Pakistani Ahmadis are not allowed to visit Saudi Arabia. They could really use the services of your uncle Jabbar. Only if he doesn’t have a problem beaming Ahmadis for a quick prayer in the Kaaba.