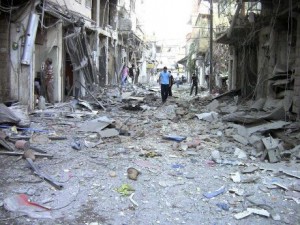 Picture a wartime scenario of a family attempting to flee its home near Damascus, once considered the safest place in Syria. Picture a young girl hunkering down in her basement all day long because of incessant shelling. These tragic stories are becoming a typical part of an average Syrian’s life. But Syria can build internal and societal peace through the act of forbearance.

Albert Einstein once said, “Peace cannot be kept by force; it can only be achieved by understanding.” Syria must first understand that if peace is to be reached, the act of forbearance must be employed to reach it.

Forbearance has changed our nation, and these examples can be a model for peace for others. The Rev. Martin Luther King Jr. achieved great advances toward peace and equality through his nonviolent movement. African-Americans had to forbear an immense persecution at all levels.

As a nation, we have endured the loss of many servicemen and servicewomen since the “war on terror” began after the attacks of Sept. 11, 2001. Families of these individuals have learned to forbear so that the threat of international terrorism is removed and a real path to world peace is achieved.

Forbearance is even ingrained in our core principles since America’s inception in 1776 under the Virginia Declaration of Rights Section 16: “That religion, or the duty which we owe to our Creator, and the manner of discharging it, can be directed only by reason and conviction, not by force or violence; and therefore all men are equally entitled to the free exercise of religion, according to the dictates of conscience; and that it is the mutual duty of all to practice Christian forbearance, love, and charity toward each other.”

For Muslims, a formal process such as Ramadan, which ends Saturday, already exists to teach forbearance under difficult circumstances. Ramadan is a monthlong dedication to learn self-control of what Muslims eat, drink, think, speak and even desire.

Islam describes forbearance as a divine attribute called Al-Haleem that employs compassion, forgiveness, tolerance, kindness and suppressing anger. When Prophet Mohammed retook Mecca after having suffered a 10-year exile and 13 years of severe persecution, he commented, “the real champion is not one who thrashes an opponent; rather a real champion is one who controls himself when angered.”

In our everyday lives, these examples are visible within the Ahmadiyya Muslim Community in Oshkosh. Throughout the year, we run food, blood and clothing drives for the needy, to promote tolerance and kindness in the community. In addition, the Islamic Center of Madison has opened its mosque to breaking fast and sharing meals with its neighbors.

The Syrian conflict is a complex socioeconomic problem in which countless individuals have had their fundamental human rights denied. The Syrian government must set precedence for its people by showing moderation, restraint and forbearance. Such acts will better enable the government to ask the opposition to come to a peaceful resolution.

The task of forbearing – as demonstrated by local Muslim groups in America – is an obligation on every Muslim during Ramadan. It should become a national model for the government of Syria and its people for all times. It will help build a peaceful Syria, where families do not have to flee their homes for fear of their lives.
Ahmed Khan of Oshkosh is a member of the Muslim Writers Guild of America.