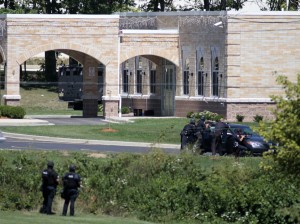 A crime against one religious group is an attack upon all of us in America. It doesn’t matter if your background or birthplace is different. Every house of worship on American soil is sacred. So said our Founding Fathers. John Adams, for instance, wrote: “No subject shall be hurt, molested, or restrained, in his person, liberty, or estate, for worshipping God in the manner most agreeable to the dictates of his own conscience.”

Because of those visionary ideals and the subsequent amendments set forth in the Constitution to guarantee freedom of worship without harm, it shakes us down to the bone to hear about anything that counters them. That’s why the headline news of the assault by a heavily armed gunman on innocent worshippers at a Sikh temple really stung.

Men, women and children of the 500-year-old Sikh faith had gathered in the morning to sing and pray at their gurudwara in Oak Creek, a quiet suburb of Milwaukee. Tragically, the deafening reverberations of rapid gunfire muted the peaceful hymns. Reports quickly spread that a tall, white suspect was firing a semi-automatic into the crowd. Fortunately, two police officers were quick to take down the terrorist. Sadly though, six worshippers were killed, and several others, including the first officer to respond, were badly wounded.

The massacre was indeed difficult to figure out. We have since learned that the attacker, Army veteran Wade Michael Page, was a neo-Nazi and skinhead, with a particular hatred against Jews, blacks, and South Asians.

Meanwhile, many are left asking, who are Sikhs? Practicing men of the Sikh faith are generally visible because of their colorful turbans and long beards. They arose from the following of Guru Baba Nanak Dev, an Indian sage, who lived during the 15th century in the region of the Punjab. Today, there are just under 30 million worldwide, and about half a million reside in the United States.

Guru Nanak is loved by many religions. For example, I am a Muslim-American belonging to the Ahmadiyya Muslim Community. We revere Guru Nanak for his love of the unity of God and actually count him in the annals of great Muslim saints. He even performed the Muslim pilgrimage to Mecca.

I doubt that the Sikh temple assailant even knew, or cared, that Guru Nanak stood for peaceful co-existence among religions and cultures.

Besides Guru Nanak’s beautiful teachings, the fact is that we should feel equally pained if any other place of worship in America was targeted. Isn’t that the essential message of religion? We read in the New Testament, “Thou shalt love thy neighbor as thyself.”

In 2009, at a lecture in Cairo, President Barack Obama quoted from my holy book, the Quran, that “whoever kills an innocent, it is as if he has killed all mankind.” The Quran even goes on to instruct its followers to protect not only mosques, but “cloisters, churches, and synagogues.”

So in this time of tragedy, we all must come together in solidarity against hatred. Our Founding Fathers codified the ideals of religious freedom when they framed the First Amendment.

Thus our whole nation and our basic code of conduct were attacked last Sunday. We stand by our grieving Sikh brothers. Their agony is also ours.

No, Guru Nanak was never a Muslim and we’ve responded in detail to the claims of Ghulam Ahmad
who alleged that he was both from a
theological and historical perspective in the following two articles:

1) Was Guru Nanak a Muslim?
http://www.islam-sikhism.info/hist/muslim/muslim01.htm