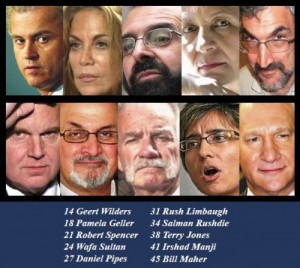 The Summer 2012 issue of The Muslim Sunrise, entitled, “In Defense of Islam: Confronting the Critics,” responds to anti-Islam allegations made by 10 infamous critics of Islam.  The Muslim Sunrise invites these critics to debate representatives of the Ahmadiyya Muslim Community publicly, in an effort to expose their allegations “as either baseless, dishonest, or criticisms of practices which, although present in Muslim-majority countries, have no basis in the religion of Islam. In doing so,” the editorial says to the critics of Islam, “the Ahmadiyya Muslim Community defends Islam not just against your misinformation, but also from the misguided ulema who pass off their own twisted beliefs as Islamic.”

Critics include: Geert Wilders, who recently released his book, Marked for Death: Islam’s War Against the West and Me; Pamela Geller and Robert Spencer, co-Founders of Stop Islamization of America (whose back and forth with The Muslim Sunrise can be read on Twitter); Daniel Pipes, Director of the Middle East Forum; and several others “from a diverse group of widely recognized politicians, pundits, pastors, professors and authors” (editorial).

The Muslim Sunrise was founded in 1921 by Mufti Muhammad Sadiq, a companion of the Promised Messiah and first missionary sent to the United States. Its 90+ years of archives can be read online. Its annual subscription costs $15 for four quarterly issues.

Download the new issue here and follow on Twitter @MuslimSunrise. The new issue will be released in hard copy at the 64th Annual Convention of the Ahmadiyya Muslim Community USA at Harrisburg, Pennsylvania later this month.

We take on all critics! They might be different from one another, but all criticize Islam. @billoislove @atifahmads

@KashifMD @atifahmads Incredible to see such a lack of nuance

@billoislove Read the article first. Where Manji is right, we acknowledge it, openly. Where she obfuscates, we call her on it.

@MuslimSunrise The tone and rhetoric of your flyer, bracketing her with Geert Wilders, was astonishing, thought better of you

it amazes me how blatantly people lie about Islam.

more amazing is how muslims refuse to see what the koran actually promotes.

What the heck are you talking about? We Muslims have MEMORIZED the book cover to cover. People like you however call yourself ‘Islam’ experts and take verses out of context and make it look like the Qur’an promotes violence.

I have read the Qur’an many times, not a single verse promotes aggression or immorality. Your claim is baseless, your argument has been debunked.

such as child molestation and buggery with animals? The cult of death sucks and your prophet liked little boys.

Haha, what proofs you got?

God decreed many situations to occur during the life of the Holy Prophet Muhammad (saw) to debunk the false allegations of future brainwashed kids such as yourself.

You got no proof, baseless allegations, filthy lies. You’re all talk.

you should actually read history not just drivel deemed acceptable by cult followers and liberals.

unqualified, uinformed people raise their voices. That is unbelievable. I’m sorry to say, but I think this people get paid for what they what they say. People listen bad stories rather than a good one.

After reading this issue, I want EVERY single one of those critics to read what we Ahmadis wrote about them and their biased idiocy. It’ll do the whole world a favor.

Your comment is proof how the media brainwashes gullible folks online.

Really how is that so? Please tell me if this isn’t true: GAY MEN/WOMEN IN MUSLIM COUNTRIES CAN BE STONED – A WOMAN CAN BE STONED FOR SUSPECTED ADULTERY – WOMEN WHO ARE RAPED AE SEEN AS DIRTY AND A SHAME TO THEIR FAMILY – WOMEN IN EGYPT CAN NOT LEAVE THE HOME WITHOUT A MALE RELATIVE & CAN NOT DRIVE – AS AN INFIDEL I DO NOT HAVE BASIC RIGHTS IN MUSLIM COUNTRIES AND MUST PAY A JIZYA!
Now tell me if I know more or less than you on Islam please also tell me if any of these are lies?????

Calm down bro. The acts you are looking at don’t reflect the whole population.

In Saudi Arabia the religious police (full of extremists) commit these crimes.

In Islam, Gay people are viewed as drug addicts. They need support to get better in the same way drug addicts do.

Islam was one of the first religions too encourage Women’s rights (such as divorce, can own their own property, requires Husbands to be loyal and respect them always etc.)

Jizya (originally) was exempt for example for religious workers (Priests, Rabbis, etc.), the elderly, and the poor. The reason they did this tax was to pay for the protection Islam gave the people in the empire (see http://www.huffingtonpost.com/craig-considine/egypt-anti-christian-bias_b_3775110.html)

Please copy and paste the link if it doesn’t work. May God bless all of you!

huffington post? i don’t think so it’s a ,liberal site and pro muslim/terrorists!
also please tell me when did Mugammed marry Ayesha and when did he have sex with her?

Look up the letter on another source if you want to. It is called the muqawqis.

I don’t know why you brought up my Prophets personal relationship, but here you go.

The court marriage between the too was when Hadhrat Ayesha was between 10 and 11 years of age (up to the 16th century in Europe they had 20 year olds marry and procreate with 13 year olds).

But the weeding ceremony (after which they would life together) took place about 5 years later. Making her at least 15, and according to European standards at the time was old.

so what and actually he fucked her at 12.
i’m over your taquiya

Taqiyya makes no sence in this context.

In Muslim tradition the husband and wife only live together after the wedding ceremony (which was when she was fifteen which is old according to European standards up to the 16th century).

By resulting to cuss words and ignoring what I was saying you are saying that you have no more counter arguments. Read more from this magazine or go to alislam.org to learn more.

Islam, the cult of death! how could anyone want to worship a child molester and lover of camel ass?

Only people who are LESSTHANTOLERANT wouldn’t be able to understand the true character of the Holy Prophet (saw).

he was a pedophile/rapist and murderer he is worse than the devil and the fact that you still look up to him makes you just as evil.

Prove that.I know of no documents that he was any of that stuff. The fact that you say that without proof makes you ignorant. Adeel, true dat.

Never desired to worship a cult of death. Prophet? Please wanted to molest young boys and rob from the weak makes you more a criminal than prophet.

Yet again I feel the need to say, prove that!! Islam actually requires ally people who are not in poverty to give at least 2% of our income to charity and the poor. Even if someone does only the minimum they give 2% more than many Americans.

We worship the God of Muhammad, Abraham,
Isaac, Ishmael, etc. If you are Christian you are calling OUR God a child molester. I don’t know where you got the canal stuff.