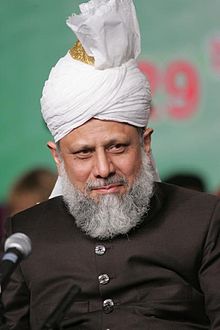 Hadhrat Mirza Masroor Ahmad, the fifth Khalifatul Masih (the successor of the Messiah) for the world’s tens of millions of Ahmadi Muslims, will deliver keynote addresses over three days to an expected crowd of 10,000 Ahmadi Muslims during the Community’s 64th annual U.S. convention in Harrisburg, Penn. The three-day event will be held Friday, June 29 through Sunday, July 1.

The proceedings, which commence June 29 with a sermon at 1:00 pm (EST), may be viewed online at the Ahmadiyya Muslim Television website www.MTA.tv, said a press release
His Holiness will deliver the opening address at the convention in the form of a regular Friday Sermon, which will be transmitted live via satellites for the benefit of Ahmadi Muslims around the world. He will also give a separate address in the Ahmadi ladies meeting hall on Saturday afternoon.
The Khalifa will then give the closing address July 1 for all attendees. In between these three addresses by the fifth Khalifa, there will speeches in the men’s convention hall on various topics, including “Principal Attributes of Allah: Grace and Mercy” by Maulana Azhar Haneef, “Ahmadiyyat: A Community Raised for Peace on Earth” by Dr. Faheem Younes and “Khilafat-e-Ahmadiyya: Second Manifestation of Divine Power” by Maulana Naseem Mahdi on Friday; “Harmonizing Word and Deed: A Quality of the Righteous” by Dr. Basyir Rodney, “Simple Lifestyle: A Way to Peace and Security” by Wasim Malik, “Abrogation of the Quran: Setting the Record Straight” by Falahuddin Shams, and “Introduction to the Ahmadiyya Muslim Community” by Hasan Hakeen on Saturday; and “The Holy Prophet’s Love for Service and Servants of Humanity” by Nasirullah Ahmad, “Service to Humanity” by Dr. Mansoor Qureshi, and “Zikre Habib: regard for the Less fortunate” by Sahibzada Mirza Maghfoor Ahmad on Sunday. Read further.
Tags:AhmadiyyaAnnual ConventionHarrisburgIslamJalsaKhalifaKhilafattopUnited Statesusa

The Muslim Sunrise Takes on 10 Critics of Islam

Which Muslim Leader Is the Real Champion of Peace?

Who Speaks for America’s Muslims? And why Americans Must Know