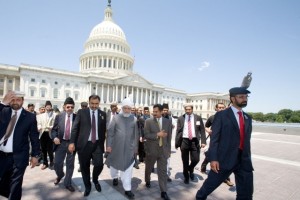 “We’ve been waiting for you.”

People say this all the time when I teach coursesabout Islam and peace at colleges, universities and places of worship.

With the Muslim world erupting in chaos from the Libyan shores of Bin Ghazi to the tribal areas of Pakistan, this yearning for peace is becoming a global phenomenon. But name a Muslim leader today, spiritual or political, who has the vision, global presence, personal integrity and a track record of establishing peace.

Well, the wait is over.

He is the fifth elected spiritual leader — or khalifa — of the worldwide Ahmadiyya Muslim Community, and is currently visiting the United States. I always tell my students that my peaceful understanding of Islam comes precisely from His Holiness’s leadership. From the day he was sworn into office (April 22, 2003), he has committed himself to extending a message of peace to the world.” Hush. Can you hear millions around the globe, whispering, “We’ve been waiting for you”?

Let’s go back to the challenge of finding a Muslim leader with vision, global presence, personal integrity and a track record.

Unless you were sleeping under a rock for the past decade, you know exactly how many Muslim leaders have a vision problem. Despite the Quran’s commitment to protecting all houses of worship, the Saudi grand Mufti called for the destruction of all churches in the Arabian Peninsula. Despite the Quran’s prohibition of religious compulsion, the mesmerizing Pakistani clericMaudoodi preached death for the apostates. Despite the Quran’s flexible position on governance, the newly elected Egyptian leader, Morsi, is anxious to implement his brand of the Shariah Law. People, can’t you see a trend? 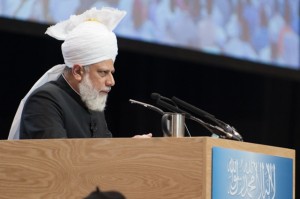 Yes, His Holiness is not the only Muslim leader rallying for peace. But he is the only leader who has an international following of millions of Muslims. In 2009, His Holiness launched a peace campaign in U.K. with the Community’s motto: “Love for all, Hatred for none.” Bearing this message, the ads decorated London’s red buses and thousands of flyers were distributed in neighborhoods. Following his lead, Ahmadiyya communities launched similar peace campaigns in Germany,Australia, Canada and other countries. In America, all hands were on the deck when a “Muslims for Peace” campaign was launched in 2010. Young volunteers distributed more than half a million flyers, the elders sponsored hundreds of bus ads, and the scholars held dozens of interfaith symposia.

Talk of integrity. His Holiness Mirza Masroor Ahmad is not someone who gives inflammatory statements to his internal audiences and plays peaceful in front of the cameras. His Friday sermons, privately watched by millions of his global followers, are a spiritual institution of peacemaking. Whether it’s violent reaction over Danish cartoons or the anger over Quran burnings, the Ahmadi Muslim khalifa has never instigated his members to create disorder. In 2004, His Holiness launched the annual National Peace Symposium in U.K. where government officials gather to exchange ideas on the promotion of peace. In 2009, he launched the annual Ahmadiyya Muslim Prize for the Advancement of Peace for individuals or organizations that have demonstrated an extraordinary commitment to the cause of peace. Watching the escalating tensions with Iran, His Holiness, has written personal letters to the Presidents of Iran, Israel, Canada and America in 2012, warning them about the threat of a nuclear third world war.

None of this is conceptually new to Ahmadi Muslim leaders though. Despite facing constitutionally backed persecution for over half a century in countries like Pakistan, Bangladesh, Indonesia, South Africa, the Ahmadi Muslim leaders have advocated for peace and compassion under threats and oppression. As a result, not even a single member of this community has ever been charged with an extremist act.

Last week, I was among the thousands to meet the Khalifa, His Holiness, during his visit to the United States. This week he will be meeting congressional leaders at the Capitol Hill. Many are waiting in line.

But many don’t like to lie in wait. For them I have good news. Just look at the teachings, practices, track record and the character of the Ahmadiyya Muslim Community and their spiritual leaders over the past century, objectively. Once done, your likely response is going to be, “We’ve been waiting for you.”