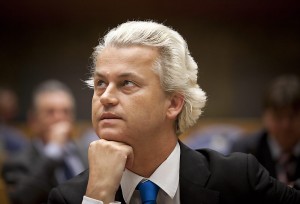 The inside back-cover of Geert Wilders’ anti-Islam book, “Marked for Death,” says it all: “Expelled from Britain, banned from Indonesia, denounced by the UN Secretary General … Wilders is unbowed and unapologetic.”

After having read his book, another word to describe Wilders comes to mind: uninformed.

Wilders promises many things in his book, above all that, “we must speak the truth.” Wilders does not fulfill his promises, however, and his disregard for truth is the most astounding. While one opinion editorial cannot possibly respond to an entire book, I illustrate below some of the more grotesque misrepresentations that Wilders proposes. Still, this article is not censorship; read his effort at your leisure.

First, Wilders’ inability to cite basic secular facts accurately indicates the unlikelihood that he can relate complex religious history and dogma properly. Wilders claims, “America — unlike the Netherlands, Canada, [Europe] — does not have hate speech laws, thanks to its First Amendment” (p. 25). This is patently false. While the First Amendment does protect offensive speech, it does not protect hate speech that is obscene, defamatory, incites to riots or fighting words. Likewise, the Supreme Court held in Virginia v. Black (2003) that cross burning with the intent to intimidate was hate speech devoid of First Amendment protection.

Wilders continues with numerous misrepresentations against Muhammad and the Quran. For example, he claims without reference that Muhammad instigated violence while in Mecca (p. 35-36). He ignores the fact that Muhammad specifically forbade Muslims to fight in Mecca, and they obeyed, instead escaping assassination and brutal persecution to Medina–some 240 miles away. Wilders further claims, again without reference, that in Medina, Muhammad established a “political dictatorship based on his Koranic revelations” (p. 36). Yet, he ignores the secular Charter of Medina that the Muslims and Jews of Medina both willingly signed and ratified; a Charter that ensured equal protection, universal religious freedom and secular governance.

Finally, Wilders describes, again without reference, the Battle of Badr as when Muhammad “defeated a Meccan escort” and “robbed and massacred” them. He ignores the fact that 313 men without adequate weaponry defended themselves a few miles outside of their homes in Medina against an army of 1,000 soldiers who traveled 240 miles to obliterate them. The winning Muslim army captured 70 POWs, and while the Arab custom for POWs was permanent slavery or death, the Muslims allowed each POW to purchase his freedom. Wilders further claims Muhammad broke a 10-year truce to march on Mecca with a “merciless army” and to “bring his theocracy” (p. 39-40). He ignores the fact that Muhammad marched only because the Meccans first broke the Treaty of Hudaybia with a pre-emptive attack. Even upon reaching Mecca, Muhammad forbade fighting provided the Meccans accept one condition–universal religious freedom. The army that Wilders describes as a “merciless” did not raise a single sword.

Each of the above examples is but the tip of the iceberg of Wilders’ misrepresentations.

I sympathize with Wilders’ desire to eradicate extremism, bigotry, violence, hatred and fascism. I loathe that he receives death threats from those claiming to be Muslim, and look forward to a day when he can live without such concerns. My advice to him, however, is that he should adhere to truth and justice, rather than perpetuate the very extremism he claims to fight. He has already been expelled from several countries due to his antics. And by the looks of how his poll numbers are dropping, he is also being expelled from many free and pluralistic minds.