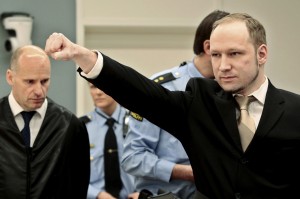 What society would tolerate a doctor who lies to his patient about his newly developed cancer, telling him it’s something else? Such a doctor would be stripped of his license to practice and might do jail time.

Why? Because cancer ranks as the second-leading cause of death in the U.S., and it’s often curable if caught early. In medicine, gross errors of judgment are taken seriously because they can determine life and death.

Now, take the issue of determining whether violence against innocent civilians qualifies as an act of terrorism, and a completely different picture arises.

As a society, when it comes to terrorists, we pick and choose whom we will call out.

The upcoming anniversary of last July’s massacre in Norway’s capital city, Oslo, is a prime example. Norwegian native Anders Behring Breivik admitted detonating a massive car bomb that destroyed an entire floor of the government building that housed the prime minister’s office. Dressed as a police officer, Breivik then raced off to the island of Utoeya, about 25 miles away, and a youth camp there. He indiscriminately shot into a crowd, leaving a final death toll of 77 Norwegians, mostly teenagers.

The authorities discovered he had stockpiled thousands of kilograms of fertilizer to use in more large-scale explosions.

The news of the carnage was painful. But, the overall response from the media was disappointing.

The headlines generally failed to label the cold-blooded massacre as an act of terrorism, although the Norwegian court has tried Brievick explicitly on terrorism charges.

Like the cancer that poses a threat to our body, let’s make no mistake that Breivik’s actions represent a danger to society in the worst way. This was not a random holdup at a convenience store. It was a calculated plot to bring down a federal government building, along with Norway’s head of state, and to exact maximum death among civilians, most of whom were just children.

Breivik is no different from the would-be Capitol building bomber from last February, Fort Hood’s Maj. Nidal Hassan, or the failed Times Square bomber Faisal Shahzad. They all share the same ideology of hatred, even though their religious claim is different.

Breivik’s primary motivation was to launch a crusade against “the ongoing Islamic colonization of Europe.” He wanted to annihilate any opposing views on the issue. In his April trial, with survivors and the families of victims in present, he provided a chilling account of shooting his victims merely because they were “young people who worked to actively uphold multicultural values.”

Shockingly, his long-winded, more than 1,800-page manifesto refers to U.S. Christian right-wing groups multiple times as an inspiration to his ideology.

Let’s be clear. Cancer does not discriminate. Terrorism has no religion. The delusion that terrorism doesn’t exist if a Muslim isn’t involved is just that, a delusion, and a dangerous one.

On the anniversary of the Oslo massacre, let’s decry it for what it is: an act of terrorism.

An early diagnosis of cancer can save a patient’s life. A decisive recognition of terrorism can rid society of its greatest threat.