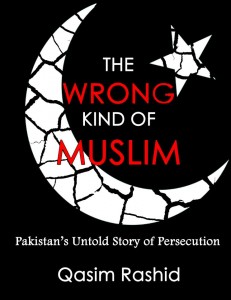 Out of the silent night, two men moved swiftly through the mosque’s front gate. Magazines loaded and safeties off, one stopped at the front door, the other proceeded through. All that separated a fully loaded Kalashnikov in the hands of a madman from 50 innocent worshippers was a straw curtain that hung helplessly in the doorway.

“In the end, they killed eight of my brothers, and shot 20 more.”

I listened silently as Yusef related the events of that ominous October day in 2005, in his hometown of Mong, Pakistan. The two men belonged to a Taliban offshoot. The 50 innocent worshipers were Ahmadi Muslims. In Pakistan, Ahmadi Muslims are nothing more than the Wrong Kind of Muslims, and therefore declared worthy of death.

And the story did not end in Mong. Not long after, eight Christians from Gojra, Pakistan would be burned alive on account of their faith. Every day, another Hindu woman is kidnapped, raped and forcibly “converted” to Islam. Wait until Maharram and Shiite Muslims become the national target of choice. If you are an atheist, you ostensibly don’t exist — and if you are street smart, you won’t exist in the public eye. Then on May 28, 2010, the Taliban returned to brutally murder another 86 Ahmadi Muslims, and one Christian — in broad daylight with police watching.

But Pakistan was not always like this. My father, born just three years after Pakistan’s birth, tells me of a time when millions flocked to Pakistan as the land of opportunity. Today, as one-third want to leave, Prime Minister Gilani callously retorts, “Why don’t they leave then, who is stopping them?” My father reminds me of a time when Pakistan’s founder, Muhammad Ali Jinnah specifically appointed non-Muslims to his cabinet to champion Pakistan’s pluralistic platform. Last year, Pakistan’s only non-Muslim federal Minister, a Christian named Shabazz Bhatti, was assassinated because he specifically championed Pakistan’s pluralistic platform. Likewise, Governor Salman Taseer — the single politician to speak up for Ahmadi Muslims — was brutally murdered for doing so. My father tells me when the dream of Pakistan was to give India’s persecuted Muslim minority the priceless opportunity to build the world’s greatest, most tolerant nation. Today, Pakistan endows Salman Taseer’s assassin as a hero and sentences the doctor who helped kill Osama bin Laden to 33 years in prison.

I ask my father about Pakistan’s beautiful beginnings because they are things I have never seen. By the time I was born in Rawalpindi, Pakistan in the early ’80s, I was already a constitutional kafir (legally declared non-Muslim). I was a criminal by age 2 because uttering asalaamo alaikum to my father, while being a legally declared non-Muslim, was a crime. By age 4, I was liable to receive capital punishment from the Pakistani government simply for believing that Muhammad is only the greatest prophet, but not the last prophet.

But for millions of Ahmadi Muslims, Christians, Hindus, Shias and atheists living in Pakistan, what began as state sanctioned persecution of the Wrong Kind of Muslims has now spread into an all out war against anyone not deemed the right kind of human.

We must remain silent no more.

While the silenced suffer in deafening agony, I am striving to make their voices heard. My humble effort launches with my story, “The Wrong Kind of Muslim,” for which I am building a base on kickstarter.com. My sincere hope is that this book gives voice to the millions who have had their voices ripped away — ripped away through terrorism, rape, burnings, unjust laws, an apartheid government and a silent majority.

And I hope you do not remain silent.

It won’t be long before another helpless curtain is all that remains between another madman with a Kalashnikov and dozens of innocent human beings. A bigger Kalashnikov in response is not the answer. But, the voice of reason and compassion through the power of the pen is more powerful a weapon than any force on Earth can withstand.

Join me, The Wrong Kind of Muslim, to give those innocent people a voice. Help me ensure that from now on, millions do not go silently into the night.