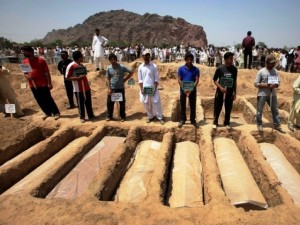 Though I was born in Pakistan, I was still a baby when my dad had to move to The Gambia in West Africa. The Gambia is a small peaceful country. Here, I remember my mother teaching me the Urdu  Qaida and telling me interesting stories about Pakistan.

I could see she missed Pakistan a great deal. She would sometimes break down in tears, relating stories of the persecution she had witnessed growing up in her hometown in Sindh.

My father had his own tales to tell about how his parents were victimised in Punjab and how Ahmadi homes and businesses in his region were burnt down in the 1980s. As a popular kid in school, I had no idea what discrimination felt like and I could never really understand why someone would be so evil.

The persecution of Ahmadis in Pakistan escalated in 1974 when the Parliament decided to judge their faith – or the lack thereof. I was still a child in The Gambia when President Ziaul Haq decided to make Pakistan an Islamic theocracy. Things quickly worsened with his promulgation of the infamous Ordinance XX which penalised Ahmadis for professing their faith.

Thousands of Ahmadis still continue to be jailed for ‘offences’ as serious as printing InshAllah (God willing) on wedding and business cards or praying or even “posing as a Muslim”, whatever that means.

I vividly remember my dad breaking the news of Zia’s end to my mother. They were both gripped by emotions of gratitude and hope – gratitude at the end of a tyrannical rule, and hope that life for fellow Ahmadis back home would finally change for the better.

Sadly, this was not to be and worse was in the waiting.

I was still a teenager when my dad finally decided to move back to Pakistan. I completed my medical degree from the prestigious King Edward Medical College in Lahore. This was the first time I experienced the stories my mother had related to me; this was the first time I was directly exposed to an environment that was occasionally hostile and clearly unwelcoming.

Let me be clear that I have great friends from my stay in Lahore and I love the city per se, but the overall experience was one of intimidation. As an Ahmadi, I was vulnerable. Even some of my fellow doctor colleagues considered me “worthy of being killed” and still continue to do so.

Towards the middle of medical school, I had to scrap my plans to stay back and serve the underprivileged parts of Pakistan. Following the martyrdom of two prominent Ahmadi doctors in quick succession, my parents convinced me to move to the United States – away from insecurity and discrimination.

Two years ago, the Dar ul Zikar, in Lahore – or ‘Place of Worship’ as the State would have me call it – was victim to the worst terrorist attack the city had witnessed. This was the place where I used to say my Friday prayers. In a brazen attack that also involved another Ahmadiyya place of worship in Model Town, almost a hundred worshippers were ruthlessly killed and hundreds of others left wounded.

The Tehreek-e-Taliban Pakistan (TTP) took responsibility for the attack and threatened that all Ahmadis who did not leave the country within three days would meet the same fate. Police refused to take the threats seriously, just as they had ignored earlier threats to the places of worship in Lahore. Ahmadis in Rabwah – a city specifically threatened – were forced to take measures to increase their own security. Consequently, when I visited the city a few months ago, it gave the impression of a war zone with sand bags and barbed wire around all office buildings, hospitals and schools.

When I learnt of the May 28, 2010 attacks, I was taken over by grief and resentment.

What society would nourish so much hate that after a hundred deaths, there would still be no outcry or condemnation?

What state would be so inhumane that even after a cold-blooded massacre, it would continue to support laws discriminating against the victims and not bring the culprits to justice – even when two of the attackers had been caught alive?

In Pakistan, matters have continued to worsen for the Ahmadis over time. Sandwiched between societal and state persecution, they continue to live in insecurity and fear. Hate speech continues unchecked and instigators of violence go unpunished. As if the systematic persecution of living Ahmadis was not enough, sporadic reports of exhumation of Ahmadi dead bodies’ leaves me horrified and grief-stricken.

For the last many years, I have felt and relived my parents’ agony. I have come to know that Pakistan has forsaken me and is not yet ready to accept me.

There are millions of good Pakistanis promoting pluralism and tolerance. To you, I express my sincere gratitude and love. It is just unfortunate that despite your numbers, those who hate me still outnumber you by far.

I pray that this dynamic shifts in your favour soon and I, in turn, am not left narrating bitter tales to my own children in the future.

I hope that Pakistan accepts me soon – for I still bleed green and am tired of bleeding red.

u being so literate think that TTP is really TT”P”… boy it is TT”USA”… Zia was their man… given power by them… who do u think is benefiting most from this situation in Pakistan…??? u probably know it but surely cant accept… afterall u have to live in their country…. But I can understand these comments from u reading how u were raised…