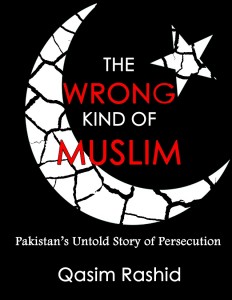 Why Write This Book?

May 28, 2012 was the 2-year anniversary of the Taliban’s attack on two mosques in Lahore, Pakistan. That day, the Taliban murdered 86 Ahmadi Muslims and 1 Christian. The Pakistani Police watched it happen from a safe distance, and even now have made no arrests. Why?

The Wrong Kind of Muslim is the first book of its kind. It relates these untold accounts of persecution and torture, directly from those living and dying under Pakistan’s oppressive regimes. This book gives voice to their forced silence. A silence which, if broken, is punishable with arrest, fine, or death.

My Fellow Americans Will Benefit From This Book

The extremism growing in Pakistan has already impacted America, and will continue to impact America. For example, just 27 days before The Taliban committed the Lahore attacks in May 2010, they trained Faisal Shahzad to detonate a car bomb in Times Square, NY. Fortunately, Shahzad failed:

The same Taliban group that trained Faisal Shahzad to kill in New York City, also murdered 87 innocent people just 27 days later in Lahore. As Americans, it is crucial that we understand how this extremism originated, where it gains strength, and how to combat it peacefully and effectively. Having extensively studied, published, and experienced Pakistan’s bigotry firsthand, the solutions I provide in the The Wrong Kind of Muslim genuinely address this problem.

My Fellow Pakistanis Will Benefit From This Book

Many of you have met Ahmadis and many more are told to stay away. So don’t worry, this is not a religious book. Instead, its a story of your fellow Pakistanis who were once Muslim, then declared non-Muslim, then labeled worthy of death, and now being murdered in cold blood.

We can certainly disagree about religious beliefs, but we both know that this bigotry and intolerance is not the Nation Jinnah founded. This book is a step towards that free and secular Pakistan for which our forefathers—both Ahmadi and non-Ahmadi—shed their blood. Keeping that in mind, this book asks and provides a path to stop the bloodshed.

I was hardly three years old when it became a crime for me to call myself a Muslim in Pakistan. Now, my son is three. My sincere hope is that this book helps move hearts and minds so that when I take my son to visit the land of his ancestors, he will be treated as an equal, not as a criminal.

Thank you for reading this. I hope you enjoy reading the book.

Originally Appeared on the Rochester Hills Patch In order for someone to be a Muslim, he or she must recite the “kalma”, or pledge. “There is no god but Allah, and Muhammad is his messenger.” Of course there is so much more to being a Muslim than just reciting words. A Muslim must be pious, peaceful, loving, submissive to God, and a servant to Mankind. But rarely do we see these...

Originally Posted on The Huffington Post I was fasting but had to fight the incessant urge to vomit, as my Twitter feed spiked with tweets about a shooting at a Sikh Gurdwara. Hoping against hope it was a mistake, my heart began to race and my teeth clenched as several news reports confirmed the incident. Another terrorist attack against innocent souls, this time just south of Milwaukee, but an...

Originally Published in The Daily Caller Al Qaeda, Taliban extremists, and Mike Huckabee have at least one thing in common — all believe Islam is a violent religion. In a recent tirade, Huckabee wondered, “why it is that we tiptoe around a religion that promotes the most murderous mayhem on the planet in their so-called holiest days. … the most likely time to have an uprising of rock throwing and...