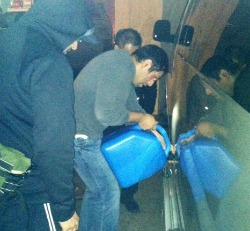 “Labbayk” or “Here I am and ready to serve” was what we exclaimed when Hurricane Sandy made her devastation known.

Four of us from the Meriden- based Connecticut chapter of the Ahmadiyya Muslim Community energetically left for New York on Saturday (Nov. 3) for a three hour trip to provide assistance to those in need.

On the way we filled large gas containers with fuel, purchased dry non-perishable foods as well as clothing to freely distribute to those in need. Arriving at respected Muavin Sadr MKA brother Zeeshan’s Shaheen restaurant around 3:30 p.m. we joined our brothers (and a few sisters) in helping load dinners deliciously composed of noodles, chicken and lentil soup into trucks to serve at Nassau Community College  in East Garden City, New York where over 1,000 displaced victims of Sandy had sought refugee.

At the college, many of us served the long line of hungry victims as others brought food to the elderly, while yet others helped move essential items for the public’s easy access. 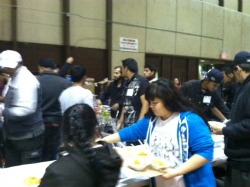 Not only were ties of brotherhood strengthened between Ahmadi Muslims but new lasting bonds were built between volunteers of other humanitarian relief groups such as American Red Cross. We identified ourselves as Muslims For Life who believe in the Messiah (pbuh). Victims alongside volunteers were overjoyed to witness the tremendous efforts put forth by these “dutiful and selfless Muslims.

They sincerely thanked us and thoughtfully prayed on our behalf for serving the hungry and less fortunate. Hundreds upon hundreds were served as we thanked Almighty God for making us a part of this noble endeavor. During the course of this eye-opening experience, we were enabled by God, the Helper, to distribute some food, gas and clothing to both Ahmadi brothers and our fellow Americans of various creeds.

Whether Muslim, Christian, Jewish or other we all worked harmoniously and tirelessly together wearing the garb a volunteer and servant solely for the sublime sake of Almighty God and to have Him alone as our desired reward.