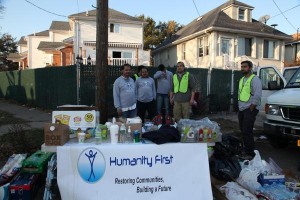 Instead of shopping this Black Friday, why don’t we consider the ones who lost everything?

My Ahmadi Muslim brothers had the best response after Hurricane Sandy devasted homes. We traveled to New York and joined volunteers with Humanity First and the American Red Cross. We dove right in to aide several families, removing rubble from destroyed homes.

“An overpowering sense of loving mercy touched and melted us,” said Mubasil Chaudhry, a leading youth from the Meriden-based Ahmadiyya Muslim Community, who lead the team of volunteers.

Mubasil said the eye- opening experience, seeing brothers and sisters of various backgrounds come together under God to help those in need, so affected his Muslim brothers that his team will return to New York to do more this weekend.

“Only after becoming involved did we fully fathom the lasting catastrophe left behind by Sandy’s swift visit,” Mubasil said.

I gladly belong to the oldest Islamic organization in the United States, the Ahmadiyya Muslim Community. We are Muslims who believe in both Messiahs; Jesus and Ahmad (p.b.u.t.) who always encourage others to think beyond themselves, care for others, and sacrifice for the good of the needy.

I invite you to join the lofty ranks of noble volunteers, if not for God’s sake, do it for the helpless victims. After all, we’re only asked to invest a few measly hours, while Hurricane Sandy victims will struggle for the rest of their lives.

Donations go a long way in answering their cry, and never forget the power of prayer! So let’s emulate the wise and “do unto others…”

My Muslims brothers have already served twice and will be return to New York this weekend to do as much as we can. I dare you to do the same!

“Never shall you attain to righteousness unless you spend out of that which you love; and whatever you spend, God surely knows it well” (Quran Ch. Family of Imran 3:93).