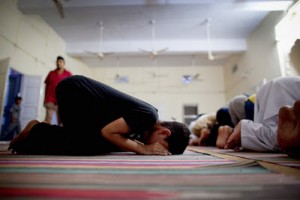 The recent film “Innocence of Muslims” which sparked riots and protests around the Muslim world was not the worst or last deranged attempt to ignite unjust hatred.

Indeed, since Prophet Muhammad’s birth to a beautiful couple named Aminah and Abdullah, the meek, poor, unlettered orphan of Arabia’s desert has tearfully been the target of repeated physical and character assassinations! But what, some ask, can anyone have against he who humbly served both Creator and creation, while being hailed as the harbinger of loving peace and merciful justice? We could ask the same question about his predecessor; the blessed Messiah Jesus, as we painfully recall his gruesome crucifixion. Or, our noble Patriarch Abraham, when Nimrod savagely cast him into a fiery furnace.

The essential answer lies in this familiar quote; ‘these six doth the Lord hate: yea, seven an abomination into him: A proud look, a lying tongue, hands that shed innocent blood, An heart that deviseth wicked imaginations, feet that be swift in running to mischief, A false witness speaketh lies, and he that soweth discord among brethren’ (Proverbs 6:16-19). This is more commonly known as ‘seven deadly sins’.

So why did Muslims hastily erupt in violence? They should have trusted in the Qur’an, which declares; ‘Although they employ diverse tools senselessly to cause distress, chaos and fabricate plenty of calumnies; Grieve not, for you (Muhammad) are most assuredly not, by the tender grace of your loving Lord, in delusion. And certainly for you is a wondrous fathomless reward, without limit, without end. And undoubtedly, you are the one who has conquered and possessed the loftiest moral excellences. And so it will soon come to pass that not only will you realize this but, eventually, everyone else will also behold in awe’ (Quran Ch. the Tool/Pen 68:2-6)? The heart strengthening echo of this inspiring promise should have been enough to endure the persecution, which in some cases is ‘worse than killing’ (Quran Ch. The Cow 2:192)

As a member of the Ahmadiyya Muslim Community, I am pleased to convey our peacefully constructive reply mirrored in Prophet Muhammad’s brave example; ‘And why shouldn’t we trust in Allah leaving Him to judge when surely He alone is our Guide and our Way. And, verily, we shall bear patiently and transcend rising above whatever verbal, physical, and emotional harm you put us through’ (Quran Ch. Abraham 14:13).

In the same month the abhorrent video was publicized, Ahmadi Muslim Americans raised over 12,000 pints of blood in our nation-wide Muslims For Life campaign to honor 9/11 victims. We walked to raise half a million dollars to help feed hungry Americans during our Walk For Humanity effort. Had those Muslims who resorted to violence instead followed Prophet Muhammad’s outstanding example of patience and tolerance, their reputation–and more importantly Islam’s reputation–would have been saved, even restored.

American Ahmadi Muslims worked hard to exemplify the gentle beauty of our beloved spiritual teacher and father, Muhammad, and that of past Divine Messengers like Moses and Jesus. It is only by following theirtolerant, flawless footsteps that we have achieved any success in service to humanity.  So let’s all modestly follow Muhammad’s enlivening paradigm; when his enemies brought him down, he vanquished them but not with the sword. Rather, he won them over through benign forgiveness and loving service per the Qur’an’s guidance:‘Repel evil with that which is best. And lo, the one between whom and thyself was enmity will become as warm friends’ (Quran Ch. The Prostration 41:35).

God’s reward and love be with you always from your humble servant,