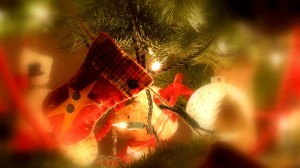 Every December, Muslim youth, parents and converts in the Western countries face a familiar dilemma: Why (or how) should they “celebrate” Christmas?

On this issue, Muslim scholars are divided. Integrators like the British Cabinet Minister, Baroness Warsiadmonish immigrant Muslims to “celebrate Christmas in traditional style, with carols, Santa … and Nativity plays.” Instigators like the Indian televangelist Zakir Naik caution British youth against saying “Merry Christmas” as it would be haram (religiously forbidden) and be like “building your place in hell.” Innovators like the Egyptian scholar Ahmad Deedat shrug off the controversy altogether. “Since we believe in Jesus and if we knew his date of birth” — the only sticking point for him — “why would we not commemorate the birth of Christ?”

Now if my head is spinning, imagine the dizziness of a Muslim convert whose family might still be decorating a Christmas tree.

For Muslim Americans, craving for pragmatic solutions, such theological gridlock is frustrating. Does it provide for a juicy discussion? Absolutely. But nothing fruitful comes out of these discussions.
So let me share the practices of five devout Muslims and true blue Americans — known to me — who join the holiday spirit with their communities in positive ways.

One: A hijab wearing Muslim women told me how she gave $20 gift cards to her garbage collectors before Christmas, thinking about the prophets who used to embrace the “untouchables” in the communities.

Two: Three years ago, a young Muslim youth leader urged me to support him in adopting Christian families. He collaborated with Muslims communities and local churches and ended up adopting nearly 150 families over two Christmas seasons.

Three: The vice president of a mosque sent an e-mail to his congregation yesterday seeking volunteers to “visit area Churches/Christian organizations before Christmas to deliver a gift basket and wish them Happy Holidays.”

Four: A students writes over a dozen greeting cards to her Christian friends, every year, wishing them season’s greetings and a new year of health and wellness. Her dad gives gift cards to his employees.

Five: A Muslim convert who collects good qualities coats and jackets every year and distributes them for free, before Christmas, to the folks at local shelters.

If these five people were “celebrating Christmas,” then yes, I support all American Muslims to celebrate Christmas in the same vein.

But it’s becoming fashionable for some American Muslims — generally upper class — to hold Western style Christmas parties “honoring Jesus.” I wonder if that’s a desperate attempt to assimilate — because you can’t honor a hallow figure with a shallow festivity.

Imagine if an alien were to visit such a Christmas party, knowing the party was in the honor of a famous personality, would he be able to guess the attributes of that personality? Looking at a largely upper class crowd dressed in designer clothing, would he reckon Jesus as the liberator of the poor? Listening to the small talk would he fathom Jesus to be a great ethical teacher? Looking at a dinner table with 20 food choices for 10 people, would he believe Jesus urged his followers to feed the hungry?

Halfway into the discussion, such folks say: Can’t we just celebrate Christmas because it’s fun? You can, I say. Just don’t put the label of religion over it.

Even if Muslim Americans agree with the service approach of “how to celebrate,” the question, “why to celebrate” remains. Why go out of the cozy comfort zone? Why not stay home and unplug?

The answer is simple. Serving mankind is a part of a Muslim’s faith. Like Jesus, Prophet Muhammad’s life is replete with acts of helping the poor, feeding the hungry, embracing the outcast and serving people — indiscriminately. The Prophet also urged his followers to exchange gifts in order to remove the rancor between hearts.

Muslims Americans: Go be a part of the joy of the season. But as you send your children to embrace the garbage collectors and adopt neglected families, remind them that we don’t celebrate Christmas seeking worldly gain or social acceptance. “We feed you for Allah’s pleasure only. We desire no reward nor thanks” (Quran 76:10).

This article was originally published in the Washington Post, On Faith Blog