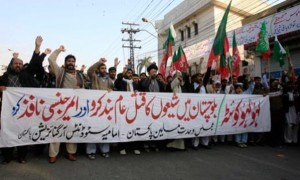 Pakistan went through a Rosa Parks moment on Jan. 10 when twin bombings killed more than 100 members of the persecuted Shiite Muslim sect. The families refused to bury their kin. They protested — in subfreezing temperatures — by sitting next to the dead bodies for four days, demanding the ouster of the provincial government. And even though on Jan. 14 the provincial government was removed, nationwide hatred against the minorities was not.

Hate against the Christians, Hindus and even Muslims, like the Shiites and Ahmadis, thrives on the Pakistani streets. Banners, graffiti, pamphlets and fiery sermons calling for “death of the infidel” are no secret. But imagine if all minority sects had resolved to #RemoveHate when its seeds were first planted against the Ahmadis 50 years ago, this savagery against innocent Shiites could have been prevented.

The irony was aptly captured by this picture, taken by a BBC journalist and now going viral on social media. It shows a group of Shiites protesting the recent attacks under another banner in the background, spewing anti-Ahmadi hatred.

So here is my unifying proposal for all Pakistani Muslims: redeem yourselves by starting a #RemoveHateTwitter campaign. You cannot change the discriminatory laws and you cannot change the school curricula — at least not that easily. But why not, physically and literally, tear down the banners, whitewashing the graffiti and throw away the pamphlets that incite hatred or violence against any religious group?

Americans may argue to confront such hate speech with “more good speech.” But here lies the rub: These banners actually incite violence by calling minorities “worthy of death” and leaving thousands dead.

These deaths — or target killings — are not happening in a vacuum. Just look at the anti-Ahmadi play book: First, the political arm of the Saudi funded Wahabi sect pigeonholes a minority sect as non-Muslims. This is followed by changing the public opinion and poisoning the public discourse, which manifests as hate filled banners and graffiti, and culminates into constitutional edicts and discriminatory laws.

For Pakistani minorities, the process has been kick-started. A 2012 Pew poll showed that 50 percent of Sunnis in Pakistan now believe Shiites to be non-Muslims. For Sufis, that number was at 25 percent.

Historically, Muslim sects in Pakistan chose to appease the “worthy of death” rhetoric against another minority because they saw it as an insurance policy for themselves. Perhaps they should listen to John F. Kennedy’s inauguration speech of 1961: “…remember that, in the past, those who foolishly sought power by riding the back of the tiger ended up inside.”

Don’t #RemoveHate and soon liberals and working women will be next.

Let your Twitter feeds go wild with #RemoveHate. Let Facebook pages be dedicated to exploring and sharing the best ideas to remove hate from our surroundings. Did you use a ladder or climb on top of boxes to tear down the banner? Did you use paint or white wash to remove graffiti? Is pre-dawn a better time than post-dusk?

I beseech you, my Pakistani Muslim family: Sectarian killings are neither a Shiite nor an Ahmadi issue; they are a human rights issue. Instead of resorting to conspiracy theories, take individual responsibility to#RemoveHate from your streets. But if you still choose to stand under a hateful banner today, don’t complain if you are on it tomorrow.

Dr. Faheem Younus is a clinical associate professor at the University of Maryland. He is the founder ofMuslimerican.com. Follow him on Twitter at @FaheemYounus.