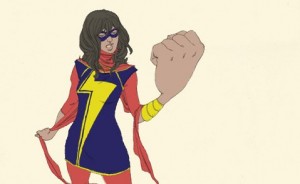 This Thanksgiving, we all will have many reasons to be thankful. I, for one, am thankful for all the women in my life, which at the moment include my mother and sister-in-law. It goes without saying that women are superheroes. It is then rather fitting that Marvel’s newest character, Ms. Marvel, is portrayed as a teenage female Muslim. While we’d all agree that women are superheroes, Islam has placed a particular respect and deference toward women that makes their superhero persona all the more natural.

t may seem like a leap of faith to believe that Islam guaranteed women superpowers 1,500 years ago, in a time when women were treated as mere chattel, a time when female infants would even be buried alive. This was a time where men could marry an unlimited number of wives and when women were given no legal status.

The Qur’an combats this injustice by first putting men and women on an equal playing field. God states in the Qur’an, “whoso does good whether male or female, and is a believer, shall enter Paradise and they shall not be wronged a whit.” (4:125) Rather than strictly addressing “all of mankind,” the Qur’an specifically addresses women, letting it be known that women and men are equal. Regardless of society’s manmade laws, women and men are equal in God’s view.

Of course, many Islamophobes would be quick to retort that Muslims have usurped women’s rights by shrouding women under a veil. While I can’t speak on behalf of Muslims who commit un-Islamic acts in the name of Islam, these allegations are unfounded. Muslims are taught to follow the ideals of Mary, mother of Jesus Christ, after whom Chapter 19 of the Qur’an has been named. Setting Mary as an exemplar, the Qur’an states, “And remember when the angels said: O Mary, Allah has chosen thee and purified thee and chosen thee above the women of all peoples.” (3:43)

Just as nuns cover themselves, Muslim women follow the same principles of modesty in their own dress. Women are not to be coerced into covering their heads, but it is a decision made of their own volition. While some may think the burqa imprisons women, there is reason to believe that the bikini imprisons women. As one study suggests, viewing women’s objectified bodies shuts down portions of the brain and causes men to “judge women to be less intelligent, likeable, ambitious and competent.” The Qur’an foreshadows this objectification, stating, “and display not your beauty like the displaying of the former days of ignorance.” (33:34)

But besides adorning women with this armor, Islam provides real superpowers to women. The Qur’an describes the relationship between a man and a woman as “They are a garment for you, and you are a garment for them.” (2:188) Women are a shield for others, selflessly providing comfort and protection, just like any superhero, which in turn makes it imperative for men to be a “garment” for women as well.

Moreover, the Prophet Muhammad has said that “Paradise lies under your mother’s feet.” Paradise, any believer’s ultimate goal, lies not under the feet of a man but under women’s footsteps. This power granted to women makes them a bona fide superhero. After all, whose advice often persuades us the most, from our infant age to our elderly years? The advice of our mothers.

Islam gives an incentive to respect the mothers and women in our lives. Ms. Marvel just reaffirms a basic truth: Women are superheros. Muslims and non-Muslims alike can be thankful for Islam, which codified women’s superpowers 1,500 years ago.