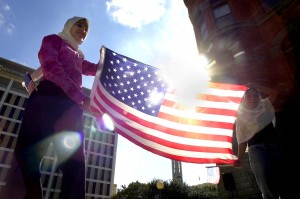 Over Thanksgiving dinner a friend asked me a usual question: “What are you thankful for today?”

My answer was rather unusual: “I am thankful to live in the most Islamic country of the world.”

With a stunned face, my friend instantly reacted, “America, the most Islamic country!?”

Puzzled once again, he exclaimed, “What Islamic values?”

To elaborate, I highlighted fundamental Islamic values that sadly most Muslim countries are devoid of today but America still embraces.

My first example was cleanliness. Every Muslim knows Prophet Muhammad declared cleanliness equivalent to half of the Islamic faith. The Islamic concept of cleanliness ranges from personal hygiene to environmental well-being. Today no Muslim country — with or without oil money — can come close to the cleanliness standards we enjoy in America. America’s Environmental Protection Agency and Centers for Disease Control have unprecedented authority and latitude to ensure environmental safety and public health.

After cleanliness, I reverted to charitable giving, which is, in fact, one of the five pillars of Islam. Numerous verses of the Quran urge Muslims to help the needy and feed the hungry. No doubt Muslims around the world are generous in giving, but Americans simply outdo them. According to the World Giving Index, which ranks 153 countries across the globe for their charitable behavior, no Muslim country ever surpassed the U.S. America even topped the list in 2011.

My friend countered, “That’s because America is rich. Every year, Muslim countries raise hundreds of billions of dollars in charity.”

“True,” I acknowledged, “but corruption devours most of it.” I advanced my argument by quoting many verses from the Quran that demand Muslims show the utmost honesty, truthfulness and justice in all worldly and religious matters. However, the behavior of Muslim countries tells an opposite story. Many Muslim countries were ranked in the bottom 25 of 176 countries by the Transparency International’s Corruption Perception Index of 2012. No Muslim country ranked in the top 25 least-corrupt countries, where America stood at 17th position.

My friend, who seemed to understand my viewpoint by now, questioned again: “Many other non-Muslim countries are better than America in the corruption index. Why is America the most Islamic country?”

“Religious freedom,” I answered without difficulty. America champions the highest standard of religious freedom, a lost Islamic value, protecting the rights of all human beings, regardless of their color or creed. Prophet Muhammad set the precedent for Muslims by writing the historic Charter of Medina when he founded the first Islamic state in 622. The Charter of Medina safeguarded fundamental human rights for all citizens living under one state, including Jews, Christians, Pagans and Muslims. Ironically, 1,400 years later, most Muslim countries treat their minorities as second-class citizens and allow chaotic Muslim mobs to burn churches and temples. Let alone minorities of other faiths, some Muslim sects who do not conform to their puritanical definition of Islam face brutal persecution. Today, Muhammad’s Charter of Medina is reflected in the U.S. Constitution. While some European countries have banned building minarets on Mosques and stopped Muslim women from wearing the Islamic veil, American courts have struck down any such attempts as unconstitutional.

My friend finally rested his questioning.

I am not sure if I convinced him, but I genuinely believe America is the most Islamic country in the world today, and I am so grateful that I live here. May God bless America!

Relative to our Muslim Countries it is true America offers almost all Islamic values for all. I feel you have not considered what is being said and written. If you must indulge in Religious extremism, you should bail out from here to live in a place like Qatar and Saudi Arabia where I have lived and experienced for years the hyprocracy and show of religious garb is all false. Underneath lies a treacherous nature and money grab genes like they looted the Haj caravans regularly before oil was found in KSA.