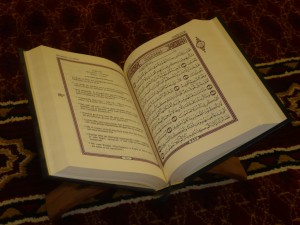 One year removed from the Boston Marathon bombings, people raise eyebrows about Muslims’ loyalty to the United States or Islam’s viewpoint on terrorism. The bombings had no relationship with the beautiful teachings of Islam. My thoughts and prayers go out to the victims of the bombings.

The holy Quran condemns all forms of cruelty, violence or extremist terrorism, as is evident by the following verse: “Whosoever killed a person — unless it be for killing a person or for creating disorder in the land — it shall be as if he had killed all mankind.” A person who kills a person unfairly or who kills someone who had neither rebelled nor became a source of violating peace among the people nor created disorder in the land, it is as if he has killed the whole of mankind. In other words, to kill a person without any cause is, according to God, like the murder of the entire human race. It is obvious from this verse how big a sin it is to take the life of another person without reason.

Holy Prophet Muhammad (peace be upon him) taught that the “love for one’s nation is a part of faith.” Thus, sincere patriotism is a requirement in Islam. To truly love God, Islam requires a person to love his nation. It is evident that love for one’s country has been made a part of Islam; Muslims must strive to reach the highest standards of loyalty to their chosen country because that is a means of reaching God and becoming close to him.

I strongly decry the acts of terrorism committed at last year’s Boston Marathon, and those acts in no way should be associated with Islam. On the contrary, I myself reflect the teachings of Islam. I am an immigrant in this country. I was born and raised in Pakistan. I have been a volunteer math tutor at Denfeld High School. I have served as a teaching assistant at the University of Minnesota Duluth. I feel honor and privilege to serve and teach the young and bright minds of this country. All my actions would strive to be a responsible member of this society.

The holy Quran, in relation to loyalty, teaches people to keep away from all things that are immodest, undesirable or that form any type of rebellion. Despite the fact my family lives in Pakistan, the truth is if there is a need to make any sacrifice for the sake of the United States I would always stand at the forefront and be constantly ready to make that sacrifice. I would follow and abide by the laws of the land, just like all other U.S. citizens. Every aspect of my life would continue to keep a relationship of total loyalty and true allegiance to the United States. Whichever field I work in or wherever I am based, I would be constantly engaged to help the nation to progress and succeed. This is because I am a true Muslim who follows true Islam. God bless America.