Originally published in The Tulsa World 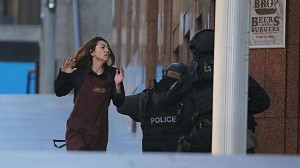 Each time I see a news headline with a link between Islam and terrorism my heart sinks. These past few hours as I watch and read about the hostage situation in Sydney I have had the same sinking feeling as I see yet another shocking story of possible terrorism. These acts of terrorism are becoming more and more prevalent with many of the perpetrators claiming to be Muslims. However, these heinous acts are not only crimes against humanity, but also a crimes against Islam, the very religion that these groups claim to follow.
Crimes such as these perpetuate fear against Muslims and Islam. This fear is on the rise even here in America and the very small but attention-grabbing minority of Muslim youth who fall prey to these ideologies do not help the matter. However, as a Muslim youth leader and a member of your community, I feel the need to set the record straight by pointing out some fundamental teachings of my religion that run directly counter to the practices of these extremists.

Islam demands the preservation of human life and gives high regard to the value of every human being. The following verse speaks to this value: “Whoso gave life to a person, it shall be as if he had given life to all of mankind . . .”(Chapter 5: Verse 33). In fact, this same verse is everyday inspiration for me as a physician and many other Muslims around the world who act to save lives. Islam and the Quran give so much value to one human life that it is absolutely absurd to imagine that this religion would sanction the killing of scores of innocents. The importance attached to the preservation of life renders the actions of ISIS, al-Qaeda, or any other terrorist organization, outside the pale of Islam.

Islam also teaches that there is, “No compulsion in religion” (Quran Chapter 2: Verse 257). This verse indicates, therefore, that no one should be forced to adopt a certain ideology or made to practice a particular faith. Consequently, in line with the ideals of the founding fathers of our country, Islam teaches that everyone has the right to practice whatever religion they choose. The above verse is complimented by another verse of the Quran that removes any shadow of doubt in this matter: “For you is your religion, and for me is my religion” (Chapter 109: Verse 7). It is abundantly clear from this verse that Islam not only discourages forceful conversion but actively promotes complete freedom of conscious. This again, shows the vast expanse between intolerant ideologies and true Islam.
It was certainly heart rendering to hear yet another news story of violence committed in the name of a religion which has taught me nothing but love for mankind. The solution, however, lies in the fundamental values of tolerance, multiculturalism, and understanding that we hold so dear here. In fact, promoting all of these can only be done by emphasizing tolerance to our youth and providing them knowledge of the true teachings of Islam. For this reason the Ahmadiyya Muslim Community is making great efforts to ensure that our youth have a firm understanding that Islamic teachings are diametrically opposed to violence in the name of religion. It is this model which both Muslims and non-Muslims should endorse as an anecdote to all radicalization, bigotry and ignorance.

Yameen Khalil is currently a supervising physician in primary care working for the Department of Veteran Affairs (VA) in Oklahoma, U.S. Prior to working in the VA he has done research in medical genetics and anesthesia. He currently serves as Vice Chair for the Muslim Writers Guild of America, in charge of author recruitment and editing for opinion editorials.