The majority of Muslims believe that Jesus was raised bodily to heaven and someone made into the likeness of Jesus was crucified in his place. Saved from an accursed death on the cross, Jesus has been waiting over 2000 years to descend back to Earth to defeat the anti-Christ and establish an Islamic dominion.

The teachings of the Quran and Prophet Muhammad (saw), however, stand in opposition to this belief. This concept entered into the understanding of mainstream Muslims only after the rapid spread of Islam amongst the Christians of Arabia and the Byzantine Empire that brought this erroneous belief with them. For early Muslims, Prophet Muhammad’s prophecy regarding the second coming of Jesus in the latter days was a metaphor. For example, Prophet Muhammad states Jesus will “descend among you… break crosses [and] kill swine” (Muslim Book 1, Hadith 287). If read literally, we would be left wondering what man would gain from Jesus roaming the Earth slaughtering pigs and breaking crosses? If understanding Jesus’ responsibilities requires a metaphorical reading, why should we expect Jesus of Nazareth to literally reappear?

The Quran supports this assertion; regarding the death of Jesus, the Quran records a conversation on the Day of Judgment where Allah will ask Jesus, “O Jesus, son of Mary, didst thou say to men, Take me and my mother for two gods beside Allah? He will answer, “Holy art thou. I could never say that to which I had no right… I said nothing to them except that which Thou didst command me – ‘Worship Allah, my Lord and your Lord.’ And I was a witness over them as long as I remained among them, but since Thou didst cause me to die, Thou hast been the Watcher over them; and Thou art Witness over all things” (5:117-118).

In response, the majority of Muslims object to translating tawaffaitani as “caused me to die” – instead translating the word as “raised me.”  Secondly, it is claimed that because this is a conversation that is to be held on the Day of Judgment and Jesus will eventually return to Earth, one cannot conclude that Jesus is already dead but that he will die after his return.

To determine the meaning of a word in the Quran, one must first assess the usage of that word in other verses of the Quran, secondly assess the Prophet Muhammad’s usage of that word and his commentary on that verse, and lastly assess the companions of the Prophet Muhammad’s understanding of it. As far as the Quran is concerned, in every instance a word from the same three-letter root and verb form as tawaffaitani is used, it invariably indicates death or sleep. The Quran defines this usage when it states “Allah takes the souls at the time of death and of those not dead he takes at the time of sleep…” (39:43).

Therefore, in 5:117-118, Jesus responds to Allah’s inquiry about whether he had introduced the concept of trinity to his people by claiming that he was either made to die or made to sleep, which prevented him from remaining a watcher over his people. Suggesting that Jesus is referring to himself falling asleep is bizarre and also inconsistent with Prophet Muhammad’s commentary on this verse. In Bukhari, in the chapter of Prophetic Commentary of the Quran (Kitab Tafsir–ul-Quran) Prophet Muhammad, regarding the Day of Judgment states, “…Some from my followers will be brought and the angels will drive them to the Hell fire. I will say, ‘O my Lord! They are my companions!’ Then a reply will come, ‘You do not know what they did after you.’ I will say as the pious servant (Jesus) said: ‘And I was a witness over them as long as I remained among them, but since Thou didst cause me to die, Thou hast been the Watcher over them; and Thou art Witness over all things’ (5:118)…” (Bukhari Vol. 6, Book 60, Hadith 149).

Here, Prophet Muhammad, when put in a similar situation as that of Jesus on the Day of Judgment, quotes Jesus from the Quran and claims that he too was only a witness over his companions as long as he remained among them and that once he was made to die, Allah alone was a guardian over them. Thus, when Prophet Muhammad applied 5:118 to himself, whatever translation of tawaffaitani one wishes to use must apply to both Prophet Muhammad and Jesus. Since it must mean death for Prophet Muhammad, it must also for Jesus.

Surprisingly, the majority of Muslims around the world understand tawaffa to mean death – except when it refers to 5:118. At every funeral, Muslims recite the prayer of Prophet Muhammad in which we implore Allah “…And those that you cause to die from among us, cause them to die upon faith” using the words tawaffaitahu and tawaffahu respectively (Tirmidhi Vol. 2, Book 5, Hadith 1024). 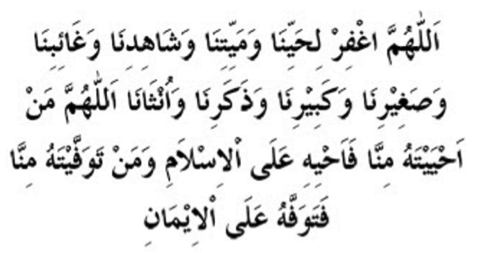 Moreover, directly preceding the hadith cited from Bukhari, Ibn Abbas (ra), an uncle of Prophet Muhammad and narrator of the hadith, defines the word mutawaffika as mumituka: 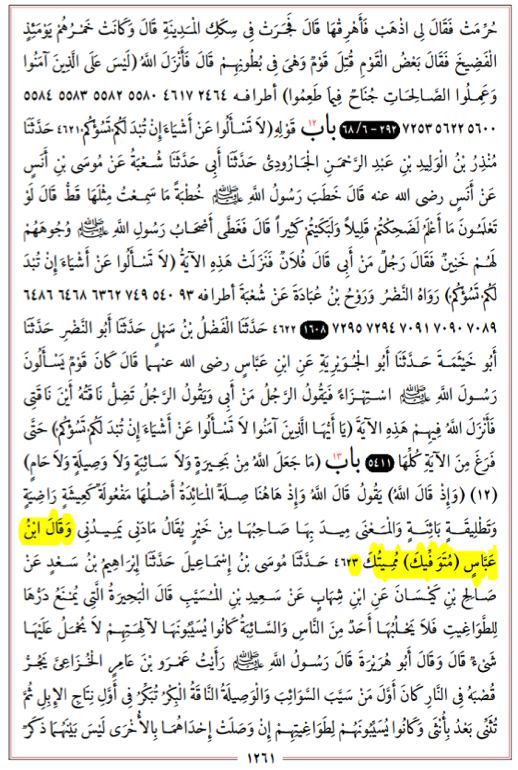 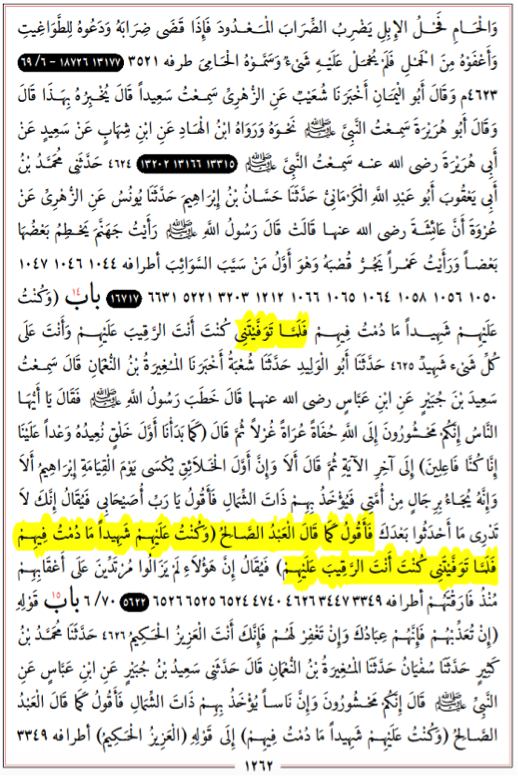 It also cannot be argued that tawaffaitani and mutawaffika will apply once Jesus descends back to Earth. Firstly, in 3:56, the sequence that Allah presents of Jesus begins first with mention of his death before any mention of him being raised. We must follow the sequence that Allah has put in place. Secondly, if we were to assume that Jesus was to come back, 5:117-118 would cease to make sense. If Jesus returns to see Christians worshipping him, how could he be shocked on the Day of Judgment at what Christians did after him or claim that he was only a “witness over them as long as he was among them”? After having come back to Earth and correcting Christian beliefs, he could not be surprised at the behavior of the Christians or claim he was only a witness over them until he was raised on the Day of Judgment. Instead, Jesus would reply to Allah that he had just come back from correcting them. The shock he actually experiences upon hearing the question is apparent in him pleading his case and proven from the similarity Prophet Muhammad draws with his own scenario on the Day of Judgment as recorded in the above quoted hadith of Bukhari.
At this point, it is often demanded that “raise thee to Myself…” be explained from 3:56. With a similar approach taken to understanding the word tawaffaitani, one can also understand the word raafi’uka (raise thee). Among numerous instances in which the Quran uses this word, regarding prophet Idrees (as), Allah states, “Relate to them the story of Idrees. He was truthful and a prophet. And we raised him to a lofty station (19:57-58). The same word rafa’a is used in relation to Prophet Idrees but it is understood to be an ascension of spiritual rank, not a physical ascension.

Thus the Quran rejects the notion that Jesus was raised physically to the heavens and has remained in this state unchanged for over 2000 years. An unbiased reading of the Quran shows that like every other prophet, Jesus too has passed away and thus the only recourse is to understand his second coming in a metaphorical sense. This understanding was revealed to the metaphorical second coming of Jesus as Prophet Muhammad prophesied in the personage of Mirza Ghulam Ahmad (as) – the founder of the Ahmadiyya Muslim Community. He writes:

“If anyone can cite a single instance from the Holy Quran or Hadith, or from ancient or modern Arabic poetry and prose, that the word tawaffa, when applied to a human being, God being the subject, has been used in any connotation other than death and taking possession of the soul, for instance, in the connotation of the taking of the body, I bind myself on oath that I shall pay that person one thousand rupees in cash by selling some of my property and shall always hold him in high esteem as a great scholar of the Holy Quran and Hadith” (Izalah-e-Auham, Ruhani Khaza’in, Volume 3, p. 603).