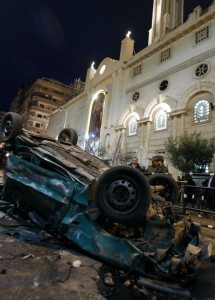 The insane and cold-blooded attack murdering 21 innocent Christians at a church in Alexandria, Egypt is a horrific beginning to 2011. As an American Muslim, this attack is completely nonsensical, in addition to being utterly disgusting and sickening. The Quran: specifically sanctions Muslims to protect churches, not to blow them up (22:40-41). The Quran tells Muslims that pious Christians are amongst the inmates of paradise (2:63, 5:70).

It is heartbreaking that the Egyptian St. Catherine Monastery houses a facsimile of the prophet Muhammad’s letter mandating full protection for Christians until the end of time, and now so-called Muslims are attacking Egyptian churches.

As a member of the Ahmadiyya Muslim Community, I wholly condemn this heinous attack. My condolences are with the victims’ families, and my sincere prayers are with the souls of the departed.

Saad Karamat is a recent graduate of University of California, Berkeley, where he studied global poverty and public health. He is an aspiring physician and humanitarian.

Understanding The 'Splitting of the Sea'