With the partition of the Indian subcontinent, the Dominion of Pakistan came into existence on Aug. 14, 1947. The valiant and astute Muhammad Ali Jinnah led the minority Muslim community of United India to the fulfillment of its dream for a separate homeland. The basis for the very demand of independence was the upholding of the freedom of religion, profession and speech.

Jinnah was an outstanding lawyer who had studied law in London. He had a modern outlook on the world and was strongly secular. “No subject … in Pakistan shall, on grounds only of religion, place of birth, descent, color or any of them be ineligible for office,” read part of the oath under which he took office. He was absolutely clear that the new state he was founding would accommodate people of all faiths and descents without any prejudice. To assert this point, he appointed a non-Muslim as his first law minister. The Muslims in his cabinet consisted of Sunni, Shia and Ahmadis alike. He believed that Islam endorsed a secular democracy and the two were perfectly compatible.

“The great majority of us are Muslims. Consequently, we have a special and a very deep sense of unity. But make no mistake: Pakistan is not a theocracy or anything like it,” he said in an address in 1948. 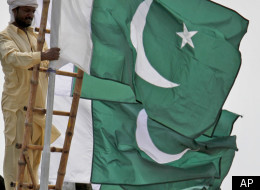 In the struggle for Pakistan, Jinnah was not faced with the Indian Congress and the British alone. He also had to endure intense animosity from hard-line Muslim clerics and counter their vile propaganda. He was accused by the ultra right wing of blasphemy, and they considered him a “great heretic” for his secular ideology. Prominent clerics like Maulana Maududi urged common Muslims not to side with Jinnah. Maududi wrote, “It is forbidden to vote for [Jinnah’s] Muslim League.” Despite this, the resolute Jinnah was successful in garnering support from the masses in most Muslim-majority areas.

Today, as the nation celebrates its 64th birthday, it finds it hard to uphold the very ideals it was founded on. As it passes through dangerously volatile times, it has forsaken its founding principles of freedom and secularism. But how and why did Pakistan turn against itself?

Even though he tried his best to steer it toward a secular democracy, Jinnah did not live long enough to see it become one. Over the coming years, Pakistan took a very troubling turn. In a matter of nine years, it became an “Islamic Republic,” and in a little over two decades, it had essentially became a theocracy.

The same extremist clerics who had opposed Jinnah and his struggle for Pakistan gradually claimed ownership of the State. They formed into political groups that used religion to amass public support. Their demonstrations of street power, frequently violent, meant that sectarian hatred and intolerance was the order of the day. Even governments avoided a clash with the radical right and became increasingly weary of arousing any negative religious sentiment and consequently losing popular vote. This only furthered the extremist cause, and in time, the original path Pakistan started on was completely forsaken. Pakistan, it was now said, was formed for the Muslims and was meant to become an Islamic theocracy where the Shariah, as interpreted by the hard-liners, would be the ultimate law.

One tragedy after another, Jinnah’s Pakistan was dealt with massive blows. His Pakistan was no more his. It had been hijacked by forces of extremism and intolerance.

No non-Muslim could hold the highest offices in any of the core institutions anymore. In 1953, there were widespread riots against the Ahmadi Muslims, a sect that extremists considered heretics. The harassment of Shia Muslims and other minority groups also increased and went largely unchecked. In 1974, the government yielded to intense pressure and declared the Ahmadiyya sect non-Muslim. Tout de suite, the State had taken authority to decide its people’s religion, and the two were no longer separate.

General Zia ul Haq took over the country and became its third military president in 1977. To legitimize his dictatorship, he sought to please the right wing and set to “Islamize” Pakistan. Amongst other things, he introduced the controversial blasphemy laws that stated death as the punishment for any derogatory remark against the Quran, Prophet Muhammad and other Islamic holy personages. For Ahmadis, he also promulgated an ordinance in 1984 that criminalized the practice of their faith. Zia’s rule was the toughest for citizens who did not adhere to what had now become the State-backed perversion of Islam. Jinnah’s secular Pakistan had drifted into the hands of his enemies.

Jinnah had warned of this in his Aug. 11, 1947 address to the Constituent Assembly of Pakistan. He said, “As you know, history shows that in England, conditions, some time ago, were much worse than those prevailing in India today. The Roman Catholics and the Protestants persecuted each other. Even now there are some States in existence where there are discriminations made and bars imposed against a particular class. Thank God, we are not starting in those days.” He continued, “Today, you might say with justice that Roman Catholics and Protestants do not exist; what exists now is that every man is a citizen, an equal citizen of Great Britain and they are all members of the Nation.”

In the same address, he said, “My guiding principle will be justice and complete impartiality, and I am sure that with your support and cooperation, I can look forward to Pakistan becoming one of the greatest nations of the world.”

Jinnah knew that a secular form of government could bridge differences and bring together people of all faiths and backgrounds to build a strong Pakistan. Just as the Catholics had learned to live with the Protestants, he was optimistic that the Pakistan he was founding would be a successful nation, a beacon of tolerance and an example of “unity in diversity.” However, the men who opposed Jinnah’s ideals before partition stood in his way yet again.

Founded on freedom of religion and practice, Pakistan is one of the biggest violator of religious freedom today. For Pakistan to succeed, it will have to reverse the dangerous turn it took and get back on the path that Jinnah laid before it. The blasphemy laws must be amended, everyone must be equal citizen of the state, the anti-Ahmadi laws must be revisited and State must remain separate from the Mosque at every cost. Pakistan must educate itself and look for the unity that Jinnah so cherished in the diversity across the land. In February 1948, Jinnah said in an address, “You have to stand guard over the development and maintenance of democracy, social justice and the equality of manhood in your own native soil. With faith, discipline and selfless devotion to duty, there is nothing worthwhile that you cannot achieve.”

Unfortunately, recent events have shown that Pakistan is still far away from taking that vital turn. The government has shown little resolve to go after the perpetrators of religious hate and violence and definitely no will to even trigger a dialogue on the controversial laws of the land. With Pakistan headed toward a steep decline, the solution lies in bold courage and reform — and quick. Jinnah’s Pakistanis will have to wake up sooner than later and reclaim the land from his opponents. Pakistanis must cause a rebirth of Pakistan — Jinnah’s Pakistan.