Originally Published in The Record

The world’s second largest hardware chain, Lowe’s, is ranked among the Top 50 corporations in America. Its website proudly displays the slogan “Let’s Build Something Together.”

However, the company’s recent actions suggest that this togetherness might not include Muslim-Americans. The company recently pulled its ads from a reality television program, “All-American Muslim,” which focuses on the lives of five Muslim families in Dearborn, Mich., the largest Muslim community in the United States.

Lowe’s acted in the wake of demands by a conservative group, the Florida Family Association. The group’s stated goal is to “defend, protect and promote traditional, biblical values.” In an email message sent to advertisers of the “All-American Muslim” show, the FFA said that the show was “propaganda that riskily hides the Islamic agenda’s clear and present danger to American liberties and traditional values.” 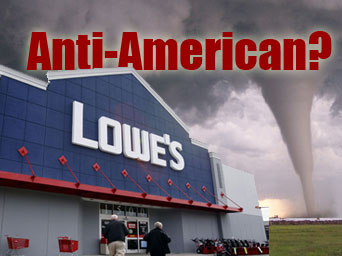 Hate groups have long exploited isolated events, promoted negative stereotypes and directed malicious propaganda against various groups at different points in our history. Muslims are the newest addition to this list, which includes African-Americans, Catholics, Jews, Japanese-Americans and German-Americans.

Islamophobia, it is feared, is on the rise in the United States. A few conservative groups have long propagated hatred against Islam in America. A recent Gallup poll showed that two-in-five Americans feel at least some prejudice towards Muslims. Muslim-Americans have been the victim of multiple hate crimes, have been subject to rigorous security checks and have been denied flights and forced off planes.

Women wearing headscarves and men with beards have publicly been called “terrorists.” Processions have shouted “go home” and “leave the USA” slogans in the face of Muslim congregations, even though America is their home.

Even as Muslims across America voiced their relief on Osama’s death, the walls of Maine’s largest mosque were spray-painted with the slogan “Osama Today, Islam Tomorrow” the very night he was killed.

Accordingly, FFA’s hate speech against Muslim-Americans does not represent a new phenomenon and is definitely not surprising. Rather, it is the ease with which Lowe’s caved in to the open bigotry that is. This is probably the first time that a company of this reputation has willingly chosen to discriminate against an American community under pressure from rightist groups.

America was founded on the ideals of religious freedom protected by the First Amendment. It is these very values that Lowe’s has inadvertently reviled. It is very important, therefore, that Rep. Christopher Murphy, D-Conn., took the issue to Congress.

In his speech, he said, “Yes we face threats from a fringe sect of radical anti-American Islamists. But there’s no debate that the millions of patriotic peace-loving Muslims who live in this country have no connection to that movement and do nothing except strengthen the fabric of our nation.”

“Now maybe you think that this is just a minor sideshow, and Congress shouldn’t be talking about it on this floor. I submit to you that you’re dead wrong. This is a major American company rubberstamping basic, foundational bigotry against a major American religious group. This nation was founded on the premise of religious freedom, and this body should never remain silent when a group of people is marginalized just because they worship a different God.”

David Caton, the executive director of FFA, lamented on national television that “The All-American Muslim” “advanced Islamic fundamentalism.” When asked what specific scenes he had objection to, he complained “it is the absence of the radical side of the Imam’s proposition of shariah law that is most concerning.”

It is interesting to note how rightist anti-Muslim propaganda groups such as the FFA thrive on radical elements exploiting Islam. Any portrayal of Muslims outside this negative stereotype therefore poses an obvious existential threat to them.

This is exactly why folks at the FFA are desperately working to prevent public education of Americans about Islam and “ordinary Muslims,” and why it is campaigning against shows such as “All-American Muslim” while continuing to promote negative stereotypes of Muslim-Americans.

This bigotry and intolerance is the real threat to America’s great founding values.

Here’s my own message to Lowe’s: “Sure, let’s build something together — anything but a prejudiced America, for God’s sake!”

This article originally appeared in The Record on Dec. 19, 2011.