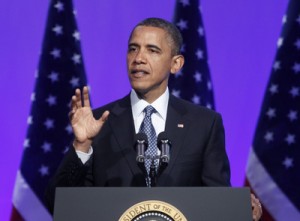 I thought the question was so absurd to begin with, that it would go away on its own.

Four years later, that absurd question, “Do you think Barack Obama is a Muslim?” keeps nagging the American psyche in national and regional polls – despite ample data to the contrary. In 2009, a Pew Research Center poll showed that one in ten Americans believed President Obama was a Muslim; the number jumped to one in five by 2010. So when last week, one in two Republican voters in the states of Mississippi and Alabama reaffirmed the same phobia, I had to say something.

Data isn’t enough to convince these pollsters, it seems. So here are my top five reasons to stop painting the president as an undercover Muslim by asking this question:

1. The president has answered the question, repeatedly.

2. If a bunch of loose correlations are enough to call Mr. Obama a Muslim, then you might as well declare Thomas Jefferson to be a Muslim too!

Jefferson’s view of God, Jesus, and biblical miracles is far more aligned with the Muslim understanding than the Christian doctrine. Like Muslims, Jefferson believed in a Creator whom he invoked in his writings. Like Muslims, Jefferson believed Jesus to be a reformer and not the son of God. Like Muslims, he believed that Jesus never even claimed to be the son of God. Like Muslims, he did not believe in the biblical miracles of Jesus literally walking on water or resurrecting to the skies. And like Muslims he owned a personal copy of the Koran. Who knows? He may have used it to incorporate the principles of equality (4:125), life (5:33), liberty (10:100) and pursuit of happiness (62:11) in the Declaration of Independence.

Isn’t it ironic that President Obama, a man who has repeatedly declared his commitment to Christianity faces unending questions about his faith, but Jefferson, a man who repeatedly denounced core Christian beliefs, stands tall and revered in a monument? Anyway, back to number 3.

3. The question is a dirty trick; a trick that does not work.

The demise of Donald Trump’s presidential bid followed by the political decline of Michele Bachmann, Herman Cain and Rick Perry – all guilty of demonizing Muslims –are a testament that voters are not seduced by this “every-Muslim-is- an-enemy” mentality. And don’t be fooled by the recent success of Rick Santorum. His campaign will soon end up right next to Newt Gingrich’s: on life support.

4. The question is an insult, not to the president or the Muslim faith, but to our Constitution.

A document that allows any American born citizen over the age of 35 to run for the office of the president, regardless of his or her religion, a document that codifies the presidential Oath to office to make it faith-neutral, “I do solemnly swear (or affirm) that I will faithfully execute the Office of President of the United States…” is too sacred to be trivialized by such bigoted questions.

5. We know the right question to ask.

Surprisingly the right question did not come from the Muslims, or the Democrats, or atheists but from the core of Republican party itself: Colin Powell. During a 2008 “Meet the Press” interview, Powell pushed back: Is there something wrong with a seven year old Muslim American kid believing that he or she could be president (one day)?

I neither plan to invite President Obama to a Friday prayer service nor wish to posthumously convert Thomas Jefferson to Islam. I just would like the pollsters to ask the right question in the future polls: Is there something wrong with a Muslim running for the president of United States?

Many seven-year-old Muslim Americans are waiting for the answer.

Dr. Faheem Younus is an adjunct faculty for religion and history at the community colleges of Baltimore County. He blogs at www.muslimerican.com.