Originally Published in The Record 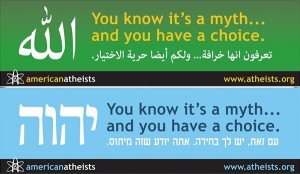 Regarding “Atheist billboard draws shrugs from Muslims” (Page A-1, March 8):

As the billboard in Paterson says, I have a choice about my religion — and I am an American-Muslim.

An atheist group is putting up billboards in Paterson, portraying Islam as not only a religion of myth but also one of compulsion. I have lived in America all my life, and I have had a choice for as long as I can remember. In the Quran itself, it is stated that I have a choice. This atheist group is just pointing out the obvious.

Calling a religion a myth near a dense population of well more than 14,000 Muslims is not mere bigotry but rather a shameless publicity stunt. For centuries, Muslims as well as members of other faiths have argued the validity of their systems of belief, but senseless misinformation has never been fruitful.

It would be much better if this atheist group decided to visit a mosque and engage in interfaith dialogue. The doors of my mosque in Clifton, the Bait-ul-Wahid Mosque, are open 24/7.