Waqar Hasan was a Pakistani Muslim immigrant who had come to New Jersey to live the American dream. Leaving his family in Milltown, NJ, he went to Dallas, TX, to open a grocery store. Four days after 9/11, a gunman came to his store and shot him in the face. The killer went on to shoot two more Muslims that same week, avenging the 9/11 attacks.

9/11 unleashed the most intense manhunt in American history. After a decade, Bin Laden was finally killed in Pakistan, bringing relief and closure to some of Bin Laden’s victims. Some — non-Muslim and Muslim — continue to suffer. I, just as Mr. Hasan and his family, am one of them. I am a Muslim-American.

Bin Laden was a mass murderer who exploited religion only to further his nefarious agenda. He did not represent Islam. Most of his victims were Muslims — including some of those martyred on 9/11. However, some people continue to see him as representative of Islam’s teachings and wrongly blame the Muslim-American community for his actions. Apparently, such people do not learn from the mistakes we made a few decades ago when German-American and Japanese-American communities were wholly treated with suspicion. 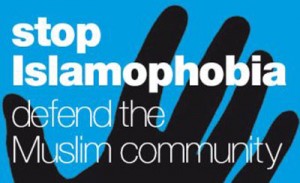 Today, polls show that two in five Americans feel some prejudice towards Muslims. Muslim-Americans have been the victim of multiple hate crimes, have been subject to rigorous security checks and have been denied flights and forced off planes. Women wearing headscarves and men with beards have publicly been called “terrorists.” Processions have shouted “go home” and “leave the USA” slogans outside Muslim-American community centers, even though America is their home. Mosques have received death threats via phone and email. Even as Muslims across America voiced their relief on Osama’s death a year back, the walls of Maine’s largest mosque were spray painted with the slogan “Osama Today, Islam Tomorrow.”

Many Muslim-American groups have condemned Al Qaeda and all similar terror groups. Why then the antipathy? Polls have shown that the vast majority of those prejudiced against Muslims have actually never met one. Their opinion of Muslim-Americans is based off of media reports alone. To combat growing Islamophobia, therefore, getting to know one another is vital. The Muslim-American community must take the lead on this and build stronger bridges with other American communities. We must also educate fellow Americans and highlight the true teachings of Islam as Prophet Muhammad practiced.

As a Muslim-American youth leader belonging to the first Islamic-American organization, the Ahmadiyya Muslim Community USA, I, along with scores of other youth, have taken to the streets distributing peace fliers and highlighting the Islamic principles of peace, love and loyalty. We have conducted numerous interfaith symposiums. We have organized several campaigns in the spirit of service to our nation. To commemorate the 10th anniversary of 9/11, for example, we organized a nationwide blood drive campaign that resulted in over 11,000 blood donations across the country — potentially saving 33,000 lives. We continue to work to change perceptions of Islam in America and prove that Muslim-Americans are loyal and peaceful American citizens — just like other Americans.

Mr. Hasan’s widow forgave her husband’s murderer and joined the fight to get him off death row. “I’ve never had bad feelings for America,” she said. “You don’t judge people by one man’s mind. Only he (the murderer) thought that way. Everyone else helped us. Everyone else was amazing.”

I agree. America is a great place. Our greatness lies in our plurality, tolerance and freedom and rejection of all forms of bigotry.