Islam Is Not The Enemy 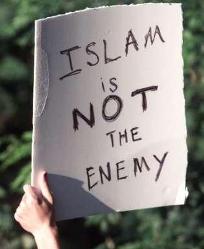 I take pride in the fact that America, in the face of adversity, strives to take the high road; there is a clear distinction between us and our enemies.

Lt. Col. Dooley’s class aimed at educating military personnel identified this enemy as Islam. As a Muslim-American, I feel betrayed and insulted. He called for the destruction of the holy cities of Mecca and Medina through “Hiroshima” style attacks with the threat that “Islam must change or we will facilitate its self-destruction.”

With this ideology, where would the distinction between us and our enemies be? We would both be barbaric. But thanks to a brave student’s complaint about this curriculum, I can continue to say that I am proud to be an American.

For the love of my Country, I disagree with Obama

Islam Is Not The Enemy

Trump’s attack on ‘We, the people’ can only weaken America