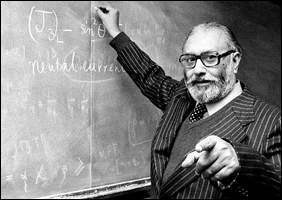 On July 4th, 2012 American physicists – not politicians – had something grand to comment on: Scientists at CERN in Geneva, Switzerland had discovered the “God Particle.” Formally known as the Higgs boson, its discovery is considered to be on par with Copernicus’ discovery of the sun being the center of the solar system. Among those scientists who helped mankind reach this milestone was the first Muslim Nobel Laureate in Physics – the late Abdus Salaam. His story, and how Western media highlighted his story following the discovery on July 4th, unveils a silver lining for relations between the West and the Muslim world.

First, what is the Higgs boson and why is it also called the “God Particle”? Think of a field of Higgs boson particles as web of glue and all other particles in the universe as different types of balls moving through this web. Those balls that do not get stuck to the glue move effortlessly along while those who do get stuck move along slower or almost not at all. By being the “glue” that allows for particles to clump together and make atoms, the Higgs boson gives particles their mass. And that is why, to the chagrin of many scientists, it is also called the “God Particle” – without it, neither mass, nor the universe as it is today, would exist.

Salaam’s life’s work laid the groundwork for the Higgs boson discovery. His genius attracted the attention of the likes of Robert Oppenheimer and Paul Dirac. But his scientific genius did have a rival – his desire to spread scientific excellence to the Third World. Salaam would quickly establish the International Centre for Theoretical Physics – not in his native Pakistan – but in Trieste, Italy. And this is where it gets really interesting.

Salaam was an Ahmadi Muslim, which meant he held beliefs many Sunni and Shia Muslims find heretical. And while his native country has to date only one Nobel Laureate, Pakistan has bested even the most vehement radicals in its abuse of Salaam’s legacy. His name is erased from textbooks, his Nobel Prize winning research derided as a Zionist conspiracy, and his contribution towards the Higgs boson discovery almost completely ignored.

But while many of his countrymen and religious kin denounced Salaam, non-Muslim nations praised his efforts. Aside from Italy’s obvious appreciation of his work, many prominent Western media outlets – CNN, The Guardian, Globe and Mail, The Washington Post, etc. – praised Salaam’s efforts and underscored the shocking silence Pakistan observed following the Higgs boson discovery.

With a great deal of negative exposure on Muslims – a great deal of which is overblown – in the West, Salaam’s contribution is a breath of fresh air for non-Muslims and Muslims alike. And for the West to praise Salaam’s work – despite the excuse to give into unwarranted bias – generates intense love from Salaam’s admirers. And here lies the silver lining: Something as cold and calculating as physics illustrates that even the tiniest particle holds the potential to keep us together.