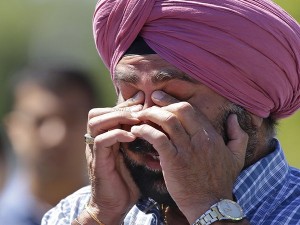 Sunday’s mass shooting at a Sikh temple in Wisconsin carried a depressing familiarity. Every few weeks in America, people somewhere are shot en masse, a gunman is captured or killed, and the debate over gun control flourishes on opinion pages. But this shooting was different. It posed a question to the core American values: Do we stand up for the safety of our religious minorities with the same vigor as we do for the mainstream population?

The question was valiantly answered by the heroic act of the two police officers who did not hesitate to risk their own lives in order to save the lives of others — in this case Sikhs, who are often mistaken for Muslims. They stood up to protect a Sikh congregation with the same vigor as was displayed for the victims of previous mass shootings.

For many Americans, embracing diversity of race, gender and religion is second nature. We take it for granted. But as a naturalized Muslim citizen, I wonder if a similar tragedy occurred against a minority in my homeland of Pakistan, would the authorities act so vigorously?

Sadly, I don’t have to wonder. On May 28, 2010, four gunmen entered two mosques in Pakistan and started shooting at a slew of worshipers belonging to the members of my community, the Ahmadiyya Muslims, which the Pakistani government classifies as a religious minority. This is where the curves of the Pakistani and American authorities’ response begin to diverge.

In Pakistan, the media broadcasted live images of the gunmen shooting at worshipers while the police stood by the sidelines. The pundits partly held the victims responsible for “provoking” the attacks by practicing their faith while reactions from Ahmadiyya Muslims went unreported. The attacks left the nation divided at best and united at worst — united in disparaging the Ahmadiyya Muslims, that is.

In America, the victims’ religion had no impact on the ferocity of the response of law enforcement agencies. The police chief barred the media from broadcasting any of their tactical maneuvers while the officers promptly confronted and killed the attacker, sustaining serious injuries in the process. The media decried the attack without qualification while the Sikh community’s reactions flooded the TV channels. And the country is united in expressing condolences to the victims and their families.

The police chief was right. If it was not for the gallant officers’ timely intervention, many more would have perished. I believe him. Since such a timely intervention was absent from the scene on May 28, 2010. Not six, but 86 Ahmadiyya Muslims were killed within a couple of hours.

Not all is rosy for American minorities. Some politicians and media personalities are actively engaged in fear mongering, mainly against American Muslims. Because some confuse them with Muslim extremists, the rhetoric has caused more than 1,000 hate crimes, including murders, against the American Sikh community since the Sept. 11 terrorist attacks. According to a Sikh leader in the Milwaukee area, two taxis owned by Sikh drivers were vandalized, and two Sikh men were assaulted there following 9/11. American Muslims still get to face the brunt of the injury, according to Muslim civil rights organizations, with thousands of complaints filed every year.

Go ahead. Change the gun laws. But please, never let anyone change this American trait of standing up for the religious minorities. The story of the police officers who rushed to the temple highlights the hidden triumph in the Wisconsin tragedy.

This article was originally published here.

Dr. Faheem Younus is an adjunct faculty for religion and history at the community colleges of Baltimore County. He blogs at www.muslimerican.com.