Originally Published in The Philadelphia Inquirer and The Washington Times 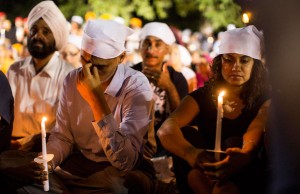 I am deeply saddened by Sunday’s tragic events at the Sikh temple in Wisconsin (“Assault on Sikh temple kills six,” Monday), a place of worship with the purpose of developing people into better human beings.

As a Muslim, I know that Sikhs face similar discrimination, often due to their attire and beards. The Quran tells us, “And if Allah did not repel some men by means of others, there would surely have been pulled down cloisters and churches and synagogues and mosques, wherein the name of God is oft commemorated” (Quran 22:41). As a true Muslim, I must not only respect all religions, but must furthermore protect their places of worship.

I pray for the families that are suffering through this horrific, senseless attack. May God grant them ease and peace of mind.

Nameer Bhatti is currently serving as Finance secretary for MKA for the Philadelphia chapter. Nameer graduated with honors from Villanova University with a degree in Accountancy and Finance. He is currently employed as an accountant and is a licensed CPA in the state of Pennsylvania. In his free time he enjoys spending time with his family, reading, and writing in the defense of Islam in order to spread its true teachings.