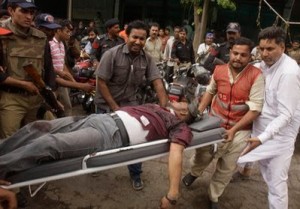 More than 40,000 civilians and 5,000 soldiers dead at the hands of  religious fanatics leaves every Pakistani guessing – where did we go wrong? Can we point out any single day in our 65 year history which  symbolizes our collective decision to surrender to the Mullah?  Thirty  eight years ago, on 7th of September 1974, the Parliament of Pakistan  brazenly stepped into a territory which is the exclusive domain of  God. Pakistan’s law-makers adopted a constitutional amendment, which  excommunicated the Ahmadiyya community as “not Muslims” for the  purposes of law.

This was the second amendment to the 1973 Constitution of Pakistan for  which Z. A. Bhutto proudly took credit. The truth is that the parliamentary proceedings were a farce. The debate between Ahmadi  representatives and the Ulema has been kept hidden from the public eye  for the last thirty eight years. If indeed this was a great service to  Islam by Bhutto’s parliament then surely the proceedings deserve to be  shared with the public.

While the amendment opened the door to the mixing of religion in  politics, it was an insult to the secular vision of Quaid-e-Azam Muhammad Ali Jinnah. Jinnah had clearly warned that “Religion should  not be allowed to come into politics…religion is merely a matter  between man and God” in his address to the Central Legislative  Assembly in February 1935. On the eve of Pakistan’s creation, on August 11, 1947, he had again reiterated his wisdom through the  message that “Hindus will cease to be Hindus and Muslims will cease to  be Muslims..in the political sense”.  By declaring Ahmadis “Non-Muslims”, our parliament became the religious arbiter – a god who could judge on the faith and belief of humans. We, as a nation chose  to ignore the wise counsel and clear warning of our own founding father. We have indeed paid the price for this.

Through this amendment, Bhutto did not win the hearts and minds of the  Mullahs. No amount of appeasement satisfied their desire for power. Instead his downfall and the arrival of Zia-ul-Haq can be contributed  to the religious parties who wanted more after tasting success. Indeed  the precedent set by the second amendment of September 7, 1974 opened  up a pandora’s box. It gave the mullahs the audacity to intimidate the  state into doing their bidding. It made it alright for the government  to interfere in matters of faith and to use religion for political  purpose. It has ultimately made religious bigotry into a pestilence  which is difficult to eradicate. The controversial blasphemy laws (1986), the Hudood Ordinance (1979), the anti-Ahmadiyya Ordinance XX  (1984) were natural results of this parliamentary decision.

The second amendment has caused Pakistan incalculable damage. Tolerance, pluralism and inter-religious harmony will not return to Pakistan unless there is a major overhaul of our constitution in line  with Jinnah’s wishes of August 11, 1947.