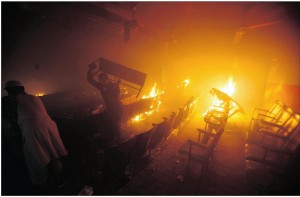 HAVE you ever played chess with a novice? You could not only predict his next move, you could force it to happen. Or, are you the novice, who feels like your every move is in response to the control of your experienced opponent?

Most of us can relate to being on one side or the other.

On a figurative level these days, it seems many elements in the Muslim world are like the naïve, reactive player.

Case in point: a chain of tragic events erupted from a poorly choreographed series of YouTube clips that ordinarily would have been thrown into the pit of Internet garbage. The segments were from a movie, “Innocence of Muslims.” They demonized Prophet Muhammad. Its screening in Hollywood a few months ago received a double thumbs down.

Anti-Muslim enthusiasts — including Florida pastor Terry Jones, infamous for pushing “Burn a Koran Day” — tried hard to promote the film. It was a dying cause.

That was until Egyptian mullah and TV talk show host Sheikh Khaled Abdallah decided to broadcast clips from the offensive movie, ironically, to protest its posting on YouTube. The result was more than 300,000 views, and major publicity.

A series of violent protests by agitated Muslim mobs have followed. The protests began in Cairo, intensified in Benghazi, Libya, and have spread to Yemen, Sudan, Pakistan, Indonesia and even Australia.

In their wake, there are two major casualties. One is the loss of precious human life: In Benghazi, the U.S. ambassador to Libya, Christopher Stevens, and three staff members were killed.

The other casualty is the Islamic faith. Sadly, it has become a predictable cause-and-effect cliché: A cartoon, book or movie that defames Muhammad is expected to arouse one or more influential Muslim clerics to gather a vigilante mob.

To win in chess, a good player learns to avoid knee-jerk reactions. In real life, pleasant surprises can win the day. Take the actual example of the target of the recent film, the prophet.

After announcing to his fellow townsmen of Mecca that he was a prophet of God, Muhammad patiently suffered bitter persecution for 13 years. After leaving Mecca for the distant town of Medina, he and his followers were repeatedly attacked by the Meccans. Finally, when his opponents broke a peace treaty, the prophet entered Mecca with an army of 10,000 followers.

The natural course of any ruler who has been serially wronged is to exact punishment.But, Muhammad chose a different move. He said that he would pardon the Meccans in the same way as the Prophet Joseph had pardoned his brothers.

In the sweep of a single statement, the prophet forgave all the aggressors. They could believe in whatever they wanted and live in peace. It was the unexpected act of forgiveness that eventually won them over.

Regarding blasphemy, the prophet instructed his followers simply to walk away from insult or offensive conversation. He never prescribed punishment for those who abused him; he responded to hatred by showing kindness and would pray for his enemies.

The impressionable Muslims in the recent mobs would do well to learn from the man whose honor they attempt to defend, and not follow the cleric who wishes to incite them to violence.

When the next drawing, book, movie or other derogatory rendition rears its ugly head — and there are many more lined up — Muslims should know that by losing control or letting their anger take over, they are playing on the losing side.

Do what the prophet did. Show forbearance. They will wind up making the leading moves, and instead of being held in disdain by the world, they will earn sympathy and goodwill. That’s a winning game.