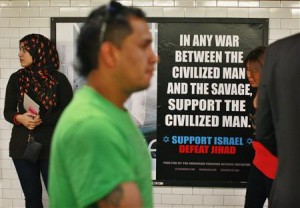 Anti-jihad ads that imply Muslims are “savage” have recently gone up on New York City subways. “Defeat Jihad” and “support the civilized man,” parts of the ad read.

The advertisement is the brainchild of Pamela Geller, co-founder of the American Freedom Defense Initiative, a hate group according to the Southern Poverty Law Center and the Anti-Defamation League. Geller is merely doing what she does best: spreading misinformation and fear of Islam and Muslims.

On the contrary, Muslim-American communities have incessantly condemned religious violence, long before Geller ignorantly fabricated a phantom threat. In fact, the word jihad does not even equate to violence. It means to strive or struggle.

In writing this letter, I strive to condemn bigotry — a jihad of the pen. Similarly, hundreds of Muslim youth across America have joined the Muslim Writers Guild of America to wage an intellectual jihad.

Islamists- YES. Muslims, not necessarily. There is a difference.
Jihad cannot be excused away as some harmless attempt at betterment. Just ask Hamas, Hezbullah, the MB; the Iranian theocracy; Saudi Arabia, which funds much jihadist violence.
Pakistani ‘religion of peace’ adherents who murder those trying to save the children from polio. Savages? Need you ask? Muhammad the mad prophet would be so proud.

Actually, it is CAIR’s whole campaign that is a complete fraud. Don’t take my word for it. Listen to what devout Muslim groups are saying about this ruse: The Islamic supremacist group Hizb ut Tahrir, which is dedicated to imposing Shariah around the world, criticized CAIR’s attempt to portray jihad as getting in your exercise or dropping off the kids at school: “If this is jihad,” one Hizb ut Tahrir member wrote, “what jihad were the Muslims doing under Rasul’Allah [Muhammad]?”
Read more at http://www.wnd.com/2012/12/chicago-media-go-tokyo-rose-over-jihad-truth-ads/#lvmwSO1ubMjJSL2S.99