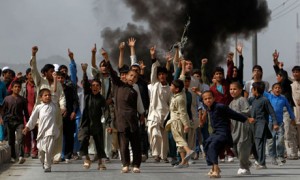 Let me begin with a history lesson. About 1,400 years ago, Prophet Muhammad was sitting in his Mosque with his companions. A nomadic non-Muslim entered the Mosque and urinated in the place of worship. Companions of the prophet rushed to beat the intruder for his grave offense of blasphemy. Prophet Muhammad stopped them. Instead, he let the nomadic blasphemer walk away, and he cleaned the Mosque himself.

In doing so, Prophet Muhammad taught the Muslims a valuable lesson. Respond to ignorance and mockery with peace and wisdom.

The extremist reaction within the Muslim countries in the wake of the film, “Innocence of Muslims,” has shown that many Muslims have forgotten the teachings of their prophet. Instead, they have reacted in completely the opposite way.

The irrational mayhem within the Muslim world against the film already has taken a toll of the precious lives of four American diplomats in Libya and many more innocent citizens in other Muslim countries, including 30 in Pakistan. The toll also includes massive property damage and several closed foreign missions and businesses throughout the Muslim countries.

The senseless and violent reaction of the extremist fringe within the entire Muslim world — not the film itself — also has caused immense damage to Islam by tarnishing the true image of Prophet Muhammad.

The film seems a despicable and amateurish attempt to play with the sensitivities of Muslims by smearing the image of the holy founder of their religion. The film hardly seems worth the attention of any sensible human being, whether Muslim or non-Muslim.

The film was first released earlier this year but did not catch much attention. A 13-minute trailer was uploaded on YouTube in early July as a second attempt to ignite a fire of provocation. Still, it went unnoticed for two months before it caught the eyes of a popular Egyptian TV host, Khaled Abdullah, who aired it on his show with Arabic subtitles on Sept. 8.

The airing aroused Muslims’ sensitivities by emphasizing the blasphemous nature of the film, giving extremist groups within the Muslim world abundant ammunition with which to fire. This sparked the beginning of a series of violent riots across the Middle East and the entire Muslim world — exactly as the filmmaker no doubt intended.

Sadly, the violent reaction not only advertised the film to the whole world but falsely depicted Islam and its prophet as violent.

Although many Muslim leaders condemned the irrational violence by extremist Muslims, they also consistently maintained the film is blasphemous so must be banned and its maker punished. They failed to emphasize on the absolute false nature of the film, which unintentionally led some non-Muslims to believe the film could have some elements of truth.

How else could Muslims, who love their prophet enormously, have reacted when Muhammad was insulted?

When a friend of mine posed this as a question, another friend responded: “To get angry over senseless abuse of the Prophet Muhammad shows you are a Muslim, but to control it shows you are a good one.”

Those resorting to violent protests within Muslim countries could have controlled their anger to show the world they not only love their prophet but still remember his teachings. They could have swallowed their incitement to show they still read the Quran, which clearly says, “And servants of Gracious God are those who walk on the Earth in a dignified manner and, when the ignorant address them, they say, ‘Peace!’”

The violent attacks were another blow to efforts at dispelling the perception equating Islam and Prophet Muhammad with violence and extremism. Now is the time to stop asking advocates of free speech to legislate against hate speech and start showing the real character of Prophet Muhammad to the world by shining light on the true history. No amount of legislation can guarantee hatemongers like Nakoula Basseley Nakoula, the purported filmmaker, will not overspill their animosity in the future. Only Muslims’ individual and collective behavior can help them overcome ignorance and shed hate.