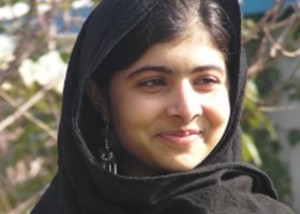 Someone is missing from this picture. Because just when I was wondering if extremists could do anymore damage to Islam’s image, they committed yet another despicable act.

As if flogging the adulterers, executing the civilians, and selling the women were not enough, on Oct. 8, the Taliban attempted to assassinate a 14-year-old girl, Malala Yousafzai. She was coming home from school in the battle-scarred valley of Swat, Pakistan, when Taliban shot her in the head and neck for her public advocacy for education. She is in critical condition.

It’s so heartening to see most media outlets applauding Malala’s courage. Yet, some commentators are using this cowardly act to attack my faith by casually suggesting: “Well, Islam does not give women the right to seek secular education.”

Excuse me? Why should we let a bunch of uneducated cowards and thugs be the press secretaries of Islam when the faith, much like Western secular values, is an illustrious enabler of women education? Please. Understand that we have a shared enemy here.

“Education is a fundamental right of women,” Leila Zerrougui, the U.N. special representative for children in armed conflict, said. But 1,400 years ago, someone stated, “Seeking knowledge is obligatory upon every Muslim man and woman.” Islam, therefore, presents education as a duty, not a mere right, for all.

“Give a girl an education and introduce her properly into the world,” said novelist Jane Austen. But 1,400 years ago, someone went a step further: “If a daughter is born to a person and he brings her up, gives her a good education and trains her in the arts of life, I shall myself stand between him and hell-fire.”

The word “rabbi” means a teacher. Going by this definition, Islam gave women the rabbinical status centuries before any other faith. The first female rabbi, Regina Jonas, was ordained on Dec. 25, 1935 in Germany; an atypical practice, which even today is limited to the non-Orthodox sects of Judaism. But 1,400 years ago someone elevated, Ayesha, the daughter of the Prophet’s companion, to the status of a teacher and jurist.

Why would the Taliban shatter the dreams of young Malala to become a student, a teacher or a scholar? It was fear, not faith, which drove them to attack this gallant girl. After all, she was writing a blog for BBC about her life under the Taliban and was the recipient of the national peace prize in 2011. You could see the leader in her. So the Taliban used the old ploy: hide your rotten fears and cultural dogmas in the shopping bag of Islam.

Malala wanted to be a doctor. But her father knew: Pakistan needed a change agent. So he inspired her to become a politician. What if she became Pakistan’s next president? Taliban have reasons to fear that thought; the three most populous Muslim countries (Indonesia, Pakistan and Bangladesh) have all elected female presidents and prime ministers in the recent past.

In yet another shot across the bow to the ailing Malala — who must be considering whether to bow to Taliban pressure or pursue her dreams — the Taliban have threatened to fatally attack her again if she survives.

It would be galling to see the Pakistani government’s ineptness in protecting this young hero. Thatsomeone in the Muslim history would never have allowed such a travesty of Islamic values. That someonewould have ensured that Malala gets her education and fulfills her dreams.

So here is my message to Malala: You are not alone. Millions of voices, including Americans, are with you. In this war of love and passion against hate and aggression, the Taliban will never win. That someonewill win. That someone who enshrined the right of a girl’s education in the Muslim faith. That someonewhose name is prophet Muhammad.

This article was originally published here.