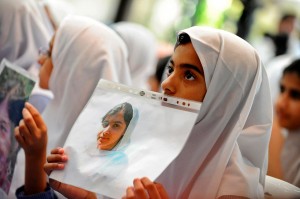 With the Taliban’s horrific attack on 14-year-old Malala Yousafzai, some insist that Islam permits women’s education. Such a position is downright offensive and wrong. Islam does not permit women’s education – it mandates it.

As a board member of the Ahmadiyya Muslim Youth Association USA (www.muslimyouth.org), I passionately support the education of the daughters of our Community. In fact, Prophet Muhammad’s example demands such.

Prophet Muhammad’s wives were well educated, cultivating a culture of intellectualism amongst all Muslim women. During his time, Muslim women were not only privy to the same religious knowledge as men, but desired – and secured – time with him every week to discuss issues of interest to them alone. And this example passed on to his successors. Once, while Umar, the Second Khalifa of Islam, was delivering an address, a Muslim woman publicly objected to his order, citing the Qur’an in her favor. Umar, ruler of the Islamic empire, declared, “The woman is right and Umar is wrong” (Baihaqi).

In early Islam, Ayesha, aside from being Prophet Muhammad’s wife, was also a general and one of the first Muslim jurists. Her worldly and religious acumen was so refined that numerous prominent male companions of Prophet Muhammad would seek her counsel. Malala’s efforts reinvigorate this spirit of intellectualism. Malala is not an anomaly, but indicative of the honor Islam bestows upon women.   The Ahmadiyya Muslim Community champions women’s education worldwide. We have operated girls schools since President Franklin Roosevelt’s era; a girls college in Rabwah, Pakistan has been in operation since 1951. An independent female auxiliary oversees the moral and educational training of Community members in more than 200 countries. This is the reality even in volatile areas such as the Khyber Pakhtunkhwa – an area sharing much of the tribal culture that Malala endures. Our male and female scholars populate the Community’s medical, legal and engineering associations. During his 2008 tour of America, His Holiness Mirza Masroor Ahmad, Khalifa of the Ahmadiyya Muslim Community, praised Muslim-American women of his Community, “Most of you who live in this country, by the grace of Allah, are well-educated. You are mature in your thinking.” He further declared, “Parents should be seriously concerned if they are not paying proper attention to their children’s religious and secular education … financial hardship cannot justify the lack of proper education and training.”

Malala’s story also reminds us of the courage early Muslim women displayed in their pursuit of knowledge. Islam’s first martyr was a woman – Sumayya. Sumayya courageously accepted Islam while still a slave—despite violent efforts to stop her from becoming a productive member of society. Her thirst for knowledge fueled her courage. Her resolve is awe-inspiring as she ultimately passed away, refusing to abandon her new found beliefs, due to being stabbed with a spear in her private parts.

Today, a 14-year-old girl, inspired by Ayesha and Samayya, must not fight this battle alone. First, we must champion legislative efforts to empower women in underdeveloped countries. Where legislation has passed, we must ensure its proper implementation. Second, philanthropic efforts such as that of Grameen Bank, United Nations Population Fund, and Humanity First must continue to empower women’s education and reduce poverty in underdeveloped countries. A 2010 Bill and Melinda Gates Foundation report found that education of women saved the lives of 4 million children in 2009. Third, Muslims and non-Muslims must help empower Malala’s cause by emphasizing that, far from condemning female education, Islam champions it. Such an attitude will help invalidate mischievous statements such as that of the Taliban spokesman, “[Malala] was promoting Western culture.”

And to the daughters of Islam, I say to always remember Prophet Muhammad’s declaration, “Education is obligatory upon every Muslim man and woman” (Tirmidhi).

Like Malala, don’t ask for your education – take it.

In Pakistan almost everyone wants education for girls and boys. NOONE is against education as Malala’s fate would have you believe.

The problem our people face is poverty. Our kids are banned from work in the name of education. The are given NO support by the NGO’s who enjoy 5 star hotels and a hearty meal AT LEAST 3 times a day.

Please remember child-labour brought Britain out of poverty. Once out they began the social security for its citizens.

Pakistanis love their children too. But without food they cannot live, let alone study. Please don’t be dececeived by Malala’s example while you enjoy life many thousands of miles away as you will do the girls more harm and NO good.