Originally Published in The Daily Beast.

As the volatility between Israel and Gaza continues to transform, one constant remains: rising “collateral damage.” Unrest in Israel traces back six decades but the concept of collateral damage stretches back several millennia. And while in modern times we are allegedly “more civilized,” 11-month-old Omar Masharawi’s funeral, three dead Israelis, and a horrifying 120 killed Palestinians, tell a different story. 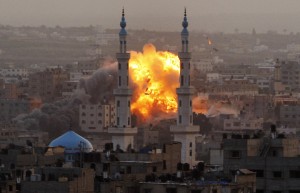 Prophet Muhammad is history’s first major figure to condemn collateral damage in word and deed. His advanced rules of war established 1400 years ago a yet unmatched humanitarian standard. And herein lies the solution to modern conflict. The Qur’an first describes when fighting is permitted:

Permission to fight is given to those against whom war is made, because they have been wronged… Those who have been driven out from their homes unjustly only because they said, ‘Our Lord is God’ — And if God did not repel some men by means of others, there would surely have been pulled down temples and churches and synagogues and mosques… (22:40-41).

Thus, the permission—not commandment—to fight is defensive. And that fighting protects temples, churches, synagogues, and mosques—which is to say, universal religious freedom.

While critics and extremist groups both love to cite Qur’anic excerpts like “kill them where ye find them,” they ignore that such verses clearly refer to treatment of those who would violently persecute Christians, Jews, or any person because of his faith. Indeed, Muhammad commanded the following uncompromising rules of war:

O people! I charge you with ten rules; learn them well…for your guidance in the battlefield! Do not commit treachery, or deviate from the right path. You must not mutilate dead bodies. Neither kill a child, nor a woman, nor an aged man. Bring no harm to the trees, nor burn them with fire, especially those which are fruitful. Slay not any of the enemy’s flock, save for your food. You are likely to pass by people who have devoted their lives to monastic services; leave them alone.

Thus, Muhammad’s rules of war permit defensive fighting against active combatants while forbidding harm to anyone or anything else—human, animal, or property. Contrast this with Hamas rocket attacks and PIJ terrorist attacks—the distinction is clear. Likewise, as Gaza’s death count rises, Israel also has blood on its hands. According to Muhammad’s rules of war, no justification exists for either side to attack civilians, property, animals, or anyone who is not an active combatant.

And even against combatants, Muhammad put Muslims on notice. Once, Usama bin Zaid overcame an enemy soldier in hand-to-hand combat. The soldier implored Usama for amnesty just as Usama prepared to deliver the deathblow. Usama heard but ignored the plea and killed him anyway. Learning of this, Muhammad vociferously condemned Usama’s act as repulsive to Islamic rules of war.

Mind you, this combatant persecuted Muslims, helped exile them from Mecca, pursued them to murder them, and even then Muhammad required Usama to accept his amnesty plea—knowing full well the plea could be a lie.

Muhammad assumed this risk because he refused to forsake any opportunity for peace. After Muhammad, the Khalifa Umar, and centuries later, the legendary Muslim General Salahuddin, again demonstrated these principles. Both insisted Jews return to Jerusalem—as equals—whereas they suffered immense persecution under Christian rule.

Even ardent critics of Islam such as Sir William Muir admit that Muslims treated POWs with immense dignity. Captives were well fed and ransoms were according to their means. Indigent captives, meanwhile, “were allotted ten boys to be taught the art of writing” as a ransom.

A ransom of education—an example Hamas and PIJ have forgotten, and one Israel doesn’t know.

Qasim Rashid is an American-Muslim human rights activist and an attorney.