Originally Published in The Washington Post and  The Express Tribune, Pakistan. 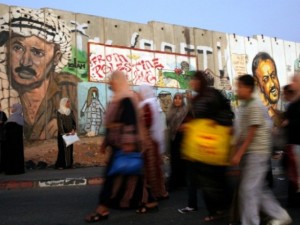 Plato may have inadvertently summed up the Israeli-Palestinian conflict 2,500 years ago when he is thought to have declared:

The cyclical bloodshed in the Arab-Israeli conflict is a direct consequence of the rigid postures of the jaded and faded leaders on both sides. On one end, we have the Palestinian codgers – with thick accents and thin visions – vowing for the annihilation of the Zionists. They know it’s impossible. And on the other are the Israeli sly foxes – with slick strategies and silly logic – vouching to “flatten all of Gaza”. They, too, know it’s impossible.

These grouchy old men with a mean age of 68 are incapable of seeing the light of the future without inserting the darkness of the past into the equation. Every compromise to them is a sell out.

That’s why I long for an Arab-Israeli Spring. I long to see the streets of Gaza and Tel Aviv pouring with Palestinian and Israeli youth leaders, who value the safety of their grandchildren more than the legacy of their grandfathers.

If my dream came true, such a leadership would have to hit the ground running. I would suggest they make the following four unpopular decisions – decisions the current leaders are incapable of:

Guys, do you really believe denying Israel her right to exist has any meaning left to it? And please, invest in brand development. I mean, who would negotiate a peace deal with an organisational name likeIslamic Resistance Movement (Hamas)? Al-Aqsa Martyr Brigade? And lest I forget: Stop shooting those medieval rockets at your own future, please.

Friends, they generate an enormous amount of resentment and the international community overwhelmingly considers them illegal. Even President Obama remarked in his 2009 Cairo speech,

“The United States does not accept the legitimacy of continued Israeli settlements. This construction violates previous agreements and undermines efforts to achieve peace. It is time for these settlements to stop.”

3) The Muslim Palestinians should never use the word ‘jihad’ to justify attacking or killing Israeli civilians.

That Google churns out 11 million matches for the term ‘Palestinian jihad’ in 0.16 second should be embarrassing to a true Muslim. Calling such savagery ‘jihad’ mars the true Palestinian jihad; the struggle of existing without sanitation, crawling around barriers and facing daily humiliation ─ disseminate this jihad through social media. Throw a rock and it only goes a few dozen feet; but publish a heartfelt op-ed in the New York Times and it rocks the highest echelons of the US policymakers.

4) The Israelis should embrace Mitt Romney’s credo of,

“We cannot kill our way out of this mess.”

Disproportionate use of force against innocent civilians has gained Israel nothing but violent resurgence. Fewer people buy into the argument of terrorists using civilians as human shields. Put yourself in their shoes. How can turning these stateless and homeless people into hopeless people ever benefit Israel?

Taking these four steps will build trust, allowing for a peaceful two-state solution to sprout in this wishful Arab-Israeli Spring of mine.

It’s not that wishful though. Such young leaders exist on both sides of the check posts. One Voice Movement boasts over 300,000 grassroots voices, each from Israel and Palestine, supporting the two-state solution. And Global Giving mobilises over 4500 youth leaders to teach them leadership skills in non-violent activism.

Children are not as afraid of the dark as we think.

On the Israeli side, they have made playgrounds out of the concrete pipes used as bunker shelters. And on the Palestinian side, they don’t stop kicking the ball as F-15 jets fly over them. It’s the older generation of the Arab-Israeli leaders who are afraid of the light.

And that’s the real tragedy.