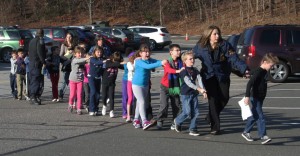 And so as we lay 26 innocent souls to rest, we ask yet again — for the 19th time in the past 60 months alone — is this the America we envisioned?

Please spare me the “it isn’t the right time to talk about gun laws” talking point. In fact, the right time was much earlier — like after Oak Creek, Boulder, or after Representative Giffords’ assassination attempt. But perhaps we are waiting for the 20th mass shooting to react.

Author Lois McMaster Bujold writes, “The dead cannot cry out for justice. It is a duty of the living to do so for them.” Charlotte, Daniel, Rachel, Olivia, Josephine, Ana, Dylan, Dawn, Madeleine, Catherine, Chase, Nancy, Jesse, James, Grace, Ann Marie, Emelie, Jack, Noah, Caroline, Jessica, Avielle, Lauren, Mary, Victoria, Benjamin, and Allison can no longer cry out for justice — but we must.

The problem, however, stems much deeper than gun control, and delves into personal accountability, or the lack thereof, in our country.

We proudly wear “support the troops” stickers and bumper stickers — hoping and praying every soldier returns home safe and sound. Meanwhile, we ignore that we live in an America in which gun violence since 1968 has killed more Americans than all Americans killed in all wars in American history — combined.

The current system is broken. The entire world, and at least half of Americans can see that, and America needn’t be held paralyzed by the other half. The path to change comes via an idea Congress considers mythological — compromise.

And compromise abhors embracing extremes. Thus, two impractical ideas should be done away with: ban all guns categorically and to require all to have a gun.

Applied, compromise recognizes that one in five Americans suffers or periodically suffers from some sort of mental illness. That being the case, compromise protects the 80 percent from the 20 percent by restricting them from carrying or purchasing guns in the first place.

Compromise recognizes that assault rifles belong in the battlefield, not in Marshall Field’s. I appreciate the gun enthusiasts precious desire to hunt big game, but not only is that “right” not a constitutional guarantee, my kid’s life is infinitely more important than your 12-point buck.

Finally, compromise closes loopholes; for example, at gun shows where purchasing guns is far easier than buying a car. It standardizes gun purchasing through a national federal venue, runs uniform criminal background checks, and requires a 28-day waiting period like Canada. And because even a car loan requires guarantors while any fool can buy an assault rifle at Walmart, compromise requires the gun purchaser to also provide credible references and guarantors.

This debate isn’t just about gun violence. It is about ensuring only the most responsible people handle guns, therefore maximizing risk mitigation. Martin Luther King delivered a moving 1963 eulogy for martyred children, “We must be concerned not merely about who murdered them, but about the system, the way of life, the philosophy which produces the murderers.”

Thus, this discussion is about better ensuring the pursuit of liberty, the right to safely attend school, a Gurdwara, a mall, or a hospital, and the right to never have to bury your child. Indeed, unless we learn to compromise for responsible gun control — we’ll only continue to compromise life and liberty.