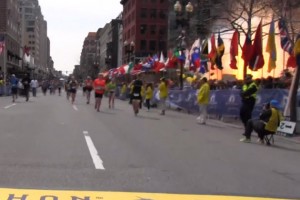 Our hospital’s chapel is typically empty. I offer my afternoon prayers there. Yesterday, as I was hopping from one patient room to another, I saw the dreadful slide of “Breaking News” of the Boston Bombings across TV screens. And even before I knew the death count, my Twitter feed was abuzz with various forms of prayer requests and #PrayforBoston was already trending.

Now that’s a technological marvel, because uniting at tragic times is a good thing; but reducing the arduous task of praying for someone to a mere buzzword or a tweet is not. Just notice. Whenever tragedy strikes, a social media bandwagon of prayers starts gearing up. But in addition to tweeting about it, do people actually pray?

I have my doubts. Prayer is like digging a well at a time when you are dying of thirst. It’s hard and it requires intense action. Who prays via tweets or Facebook updates at such a moment?

Apparently all the celebrities. From the Political right of Sarah Palin to the liberal bite ofEllen DeGeneres, from reality TV stars like Kourtney Kardashian to cheating czars likeLance Armstrong, everyone tweets their “prayers.” Space constraints stop me, otherwise the list is long. But you get the point.

I am not judging the sincerity of someone’s prayers, but such fleeting tweets of “prayers” come across hollow — if not manipulative — when a majority of these hashtagers like the Kardashians will typically move on to the same old “Do-ants-have-dicks?” tweets even before the victim’s wounds have scabbed off.

I believe such casual use of “I-am-praying-for-the victims-of-xyz” cheapens the more intense practice of prayer performed with zeal. It’s true for most religions. According to Islam, prayer is like melting your soul. You focus. You persevere. You cry. You believe. This concept is aptly described by Mirza Ghulam Ahmad, the founder of the Ahmadiyya Muslim Community, who said:

“Blessed are the prisoners who never tire of supplication, for they shall one day be freed. Blessed are the blind who are not listless in their prayers, for they shall one day see. Blessed are those lying in graves who supplicate to God for help and succor, for one day they shall be taken out of their graves. Blessed are you who never tire of supplication, your soul melts in prayer, your eyes shed tears, and a fire kindles in your breast which takes you to dark closets and wildernesses so that you may taste solitude and drives you to restlessness and near madness, for you shall finally receive Divine bounties.”

When I entered the chapel after evaluating my last patient, I encountered a blessed soul. She was sitting in the corner, holding a cross in her trembling hands, and bending forward, with tears rolling down her eyes. As I spread out my prayer rug she whispered and reminded me to pray for the victims of the Boston Bombings. She was not tweeting. She was praying.

Prayer services for the victims are being held at over 100 diverse houses of worship in Boston. Go ahead, support the #PrayForBoston trend but also attend one of these services (or pray for the victims in solitude). Imagine if the practice of regular prayer was also “trending” in our society?

#Prayforboston at But do Don't Hashtag Stop the
FacebookTwitterRedditEmailLinkedInWhatsApp