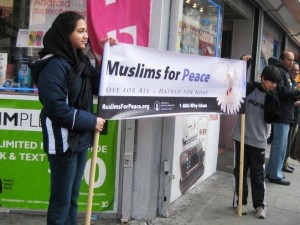 It took 9,000 officers, five days, and roughly $1 billion in lost revenue for Boston, but suspect one is dead and suspect two is in custody.

So let me start with the standard roll call: As an American Muslim, I condemn all violence in the name of religion. Terrorism has no religion and Islam is no exception. If the Tsarnaev brothers are guilty of the Boston bombings, then I hope they are brought to justice.

Here’s the deal. It is a shame that we had to employ 9,000 officers, put our lives on hold for five days, and sacrifice $1 billion in Boston revenue to catch these culprits. It is a shame that Muslim women were assaulted in retaliation, and that’s even before we knew who the suspects were. And it is a shame I received threats of anti-Muslim violence and that even my non-Muslim but non-white friends called me, fearing for their safety.

And now the public lynching and double standards against Islam begin. Mental illness was the culprit during Newtown, Conn., Oak Creek, Wis., and Aurora, Colo. More than 70 percent of America’s 64 previous mass shooters were white American men. But not one pundit, nor any politician, nor any Muslim has ever asked why White Americans or Christian Americans are not aggressively condemning these acts of terror. After all, why ask such a ludicrous question? Anyone with a functioning cerebrum could comprehend that these terrorists represent only themselves.

But why do our brains shut down when the slightest indication exists that the culprit might maybe possibly be Muslim? No sooner did the Boston tragedy occur — and even before the slightest indication emerged regarding who perpetrated the attack — but I received dozens of emails and messages asking why “moderate Muslims” aren’t condemning the attack?

This was my initial reaction to such demands for condemnation.

And this is why I am unsure if people hear Muslims when Muslims declare — in response to every violent act or attempt at violence — that Islam condemns all forms of religious violence and terrorism. Because even after condemning the Boston bombers, I receive messages that the condemnation wasn’t “loud enough” or “clear enough” or passionate enough.” ” In other words, all they heard from me was blah blah blah blah blah.

And the fact is Muslims have gone far beyond mere condemnation but taken action. The Muslims for Life campaign has raised over 25,000 blood donations in the past two years to honor 9/11 victims. The #MyJihad campaign serves to demonstrate Jihad’s true meaning. The Muslims for Peace campaign champions true, peaceful Islam. I could go on but hopefully you get the picture.

Some 40 years ago, Pakistan decided to succumb to such ignorance and direct its wrath against my peaceful and pluralistic Muslim sect — the Ahmadiyya Muslim Community. What began as passive discrimination advanced to laws banning our freedom of expression and worship, to now open violence against all religious and belief minorities in Pakistan — Ahmadi Muslims, Christians, Hindus, Shiite Muslims, Baha’is, and atheists. Pakistan went from a relatively peaceful nation entirely alien to terrorist attacks, to one that suffers through 3,000 civilian deaths from terrorists annually and now devoid of religious freedom.

If Americans have any hope of winning the “war on terror,” it won’t come from demonizing American Muslims, or Islam in general. It will come from education through interfaith dialogues, joining together in service of humanity, and recognizing that we are all equal human beings in search of similar goals of life, liberty and the pursuit of happiness. It will come from all Americans rejecting ignorance and uniting even stronger against extremism that tries to divide us.

The path of radical ignorance is a one way street; if we go down this path, don’t expect to come back so easily. As I said, I’ve tried reasoning with extremists in Pakistan to give up discrimination and favor tolerance.

condemn do Even Hear Muslims violence we When you
FacebookTwitterRedditEmailLinkedInWhatsApp