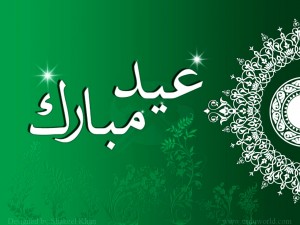 “While we should be thankful of being able to fast during the month of Ramadan, we should be particularly thankful of the freedom that we have as American Muslims,” Imam Shamshad Nasir related to a packed congregation in the Bait ul Hameed mosque in Chino, California, during Eid-ul-Fitr. Often shorted to Eid, this celebration is at the end of the 30-day month of intermittent fasting, Ramadan. Muslims throughout the world celebrate Eid by performing more prayers in the mosque, congratulating each other for overcoming a taxing physical and spiritual trial, and by inviting each other in the evening to their homes. While this may be a taxing month, Ramadan, along with Eid, is a means of liberation and freedom for Muslims, particularly for American Muslims.

If Islam wasn’t a means of liberation, then the early adherents of Islam would not have been so eager for the arrival of Ramadan and Eid. Had Ramadan been a burden for Muslims, the early adherents of Islam would not have inquired if the other months would be as blessed as Ramadan. The Qur’an records, “They ask you about the new moons (after the month of Ramadan), say, they are times appointed for the benefit of the people” (2:190). The early Muslims had such a heightened state of spirituality during Ramadan that they wondered how the other months could compare with Ramadan. Even though Ramadan is a time of hardship and fasting, the fasting is a means of liberation. Fasting puts one in a crucible, purifying one’s beliefs and removing the fetters of extravagant human wants. Instead of being focused on fueling one’s craving to always be fed, one experiences hunger. Instead of focusing on satisfying our own needs, one experiences the desire to alleviate the pain of those who are hungry without volition. Eid is a milestone of a changed self that has been liberated from the shackles of one’s desires.

The Arabic word for Eid implies a great event. A spiritual transformation is a great event. Yet the great event here lies with the American-Muslim community as a whole. This Eid marks 16-hour fasts for Muslims throughout America. This is a notable increase from the 14-hour fasts of previous years. The amount of time American Muslims fast will increase as Ramadan continues to dawn into the summer months in the Western Hemisphere. Eid marks a great event for Muslim Americans who must show more steadfastness and perseverance. In a time when Qur’ans are threatened to be burned and where lies are perpetuated about Prophet Muhammad, Americans Muslims must muster greater courage to dispel baseless attacks with patience and prayer.

Nonetheless, recognizing one’s identity as an American Muslim is an Eid in itself. American Muslims can freely wear headscarves, unlike those in France. American Muslims can erect minarets with their mosques, unlike those in Switzerland. Muslim sects, such as the Ahmadiyya Muslim Community, can be thankful to be given full rights and freedoms that are unfortunately debilitated in self-proclaimed Muslim nations. Even attempts to disrespect Islamic traditions in America, such as Oklahoma’s attempted ban on Sharia law, are quickly overturned by the court of the land. Eid fosters a heightened spirituality that naturally evokes gratefulness. After such a heightened state, it is impossible to not be grateful for the freedoms Muslims have in America.

Osaama Saifi is a member of the Ahmadiyya Muslim Community, the oldest Muslim organization in the United States. He was raised in Santa Maria, earned a bachelor’s degree from UC Berkeley, and is pursuing a law degree so that he can combat blasphemy laws in countries such as Pakistan and protect religious minorities throughout the world.