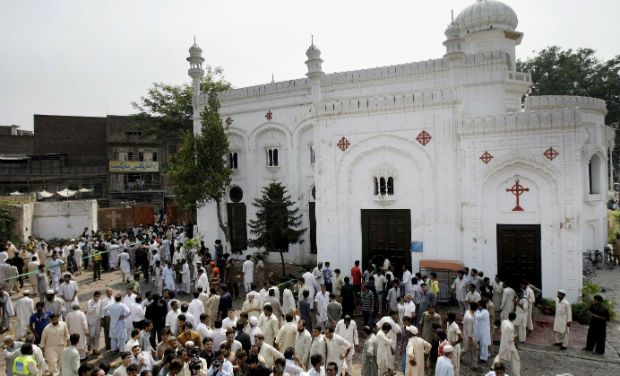 I stayed up all night writing a rejoinder to an anti-Islam politician who insists that Islam is a violent faith. Instead, I’m met by Al-Shabab who brutally murder 59 non-Muslims in Nairobi, Kenya, the Taliban who blow up a church and kill 85 Christians in Peshawar, Pakistan, and the Pakistan police who deface and destroy three Ahmadi Muslim prayer places in Sialkot, Pakistan.

But telling you all this won’t do much. You’re not the one blowing up churches and malls, defacing mosques and minarets. It’s the terrorists who need this education. So instead, let me show you, and more importantly them, what Islam actually is, especially in response to the violence we’ve seen these past few days.

The fact is I feel no different today than I felt on May 28, 2010 in Lahore, when the Taliban brutally murdered 86 of my fellow Ahmadis and one Christian in broad daylight. Ahmadis face brutal and ongoing persecution. As a result, and as with the Peshawar Church attack, Pakistani police cowardly watched during the May 28 Lahore attack.

You may have heard about that Lahore attack but what you probably didn’t hear is the response of the worldwide head of the Ahmadiyya community, Mirza Masroor Ahmad. He vehemently condemned the attack, but more importantly forbade Ahmadis from any form of retaliation. Rather, as one of the leading religious leaders who promote peace, he admonished the world’s millions of Ahmadis to engage in prayer and to further increase our service to humanity.

So what did we do? We listened and showed what Islam actually is. We showed that Islam’s world record that 200 American Ahmadi youth set last weekend as we funded, purchased, built, and donated 600 food packages to the hungry to affirm our place in the Guinness Book of Records. Islam is the 30,000 plus blood donations, that has saved up to 90,000 lives, that the Muslims for Life blood drive has collected since 2011 to honour 9/11 victims. Islam is the Tahir Heart Institute, a state of the art cardiac centre and hospital in Pakistan that offers free medical aid to any person of any faith, or of no faith. It is one of dozens of free Ahmadi-run hospitals just like it worldwide. Islam is Humanity First, a worldwide disaster relief non-profit, almost entirely volunteer-run.

As the Muslim world traverses one corrupt leader to the next, righteous hearts are naturally inclined to the beautiful message that Mirza Masroor Ahmad espouses. His is a message that champions universal freedom of conscience for all people of all faiths and for all people of no faith. His is a message that spans chapters in over 200 nations worldwide with tens of millions of members. His is a message of an Ahmadi community that has existed for 124 years without a single act of violence. And on May 28 as we painfully cleaned the blood off our mosque walls, not a single Ahmadi retaliated or responded negatively. Instead, we prayed and — as described above — further increased our service to humanity.

This is the true Islam I wish to show you. This is the right narrative we strive to write.

Yet, despite Mirza Masroor Ahmad’s message of peace, tolerance, and pluralism, while he stays up day and night insisting Islam is not a violent faith, he is forbidden under penalty of death from stepping foot in many Muslim-majority nations, Pakistan included. And when I reflect over Pakistan’s dire need for a peaceful religious leader and their outright rejection of the one man who can offer it, the same two words come to mind.