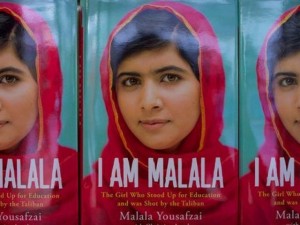 Though Malala survived the Taliban’s bullets last year, she is now again under attack in Pakistan by the very same ideology. They attacked her physically then, and now they are out to get her soul.

Right-wing anchors and self-proclaimed intellectuals have taken to disrepute her book by claiming that it reeks of a ‘Western agenda’. If a young Pakistani girl in dupatta, standing up for education and speaking against radicalisation, demanding an end to the drone war, advocating peaceful resolution to the terrorist menace which Pakistan is plagued with and speaking of hope in a progressive Pakistan, is what constitutes a ‘Western agenda’, then I’d welcome more of it.

Ansar Abbasi and Orya Maqbool Jaan have been at the forefront of the offensive. Here is what they vociferously present as a ‘Western agenda’.

Malala writes in her book regarding the Satanic Verses,

‘My father also saw the book as offensive to Islam but believes strongly in freedom of speech. “First, let’s read the book and then why not respond with our own book,” he suggested. He ended by asking in a thundering voice my grandfather would have been proud of, “Is Islam such a weak religion that it cannot tolerate a book written against it? Not my Islam!”’

All Muslims – including Malala and her father – found Rushdie’s novel offensive. However, instead of the widespread violence that ensued across parts of the Muslim world in which Muslims, ironically, lost their lives, Malala’s father believed Rushdie’s offensive novel should be responded to in the form of a literary rejoinder like this one. There are many Muslims who share the same opinion on responding to blasphemous publications. Not all Muslims share the knee-jerk “kill the blasphemer” reflex.

Saying that Malala was not against Rushdie’s Satanic verses is clearly either a case of intellectual dishonesty or dire lack of English comprehension skills on the part of the Oryas and Abbasis.

Malala’s love for the Ahmadis

Malala writes in her book,

‘Now we are a country of 180 million and more than 96 per cent are Muslim. We also have around two million Christians and more than two million Ahmadis, who say they are Muslims though our government says they are not. Sadly those minority communities are often attacked.’

Malala merely stated a fact. Ahmadis do consider themselves Muslim. And the government does deny them this right to identity. Malala did not comment on her view on Ahmadi religious beliefs.

However, even if Malala did consider Ahmadis as Muslims, how does that discredit her work or make her a lesser Pakistani? Millions of other Pakistanis – including its very founder – consider Ahmadis Muslim and believe the anti-Ahmadi laws of Pakistan are demonic and oppressive. Jinnah is known to have said,

If Jinnah was alive today, how would Pakistan’s rightist pro-Talibani anchors and journalists treat him on television? He’d be harassed and abused for his beliefs and considered a traitor in his own country.

Yes, Pakistan’s constitution says Ahmadis are non-Muslim. As per Abbasi’s admission in the same program, the constitution also prescribes Arabic as a mandatory language. Now, would there be a similar witch-hunt against those who refuse to learn Arabic in schools? A majority of us don’t.

Would there be a similar witch-hunt against the Taliban and other radical outfits who outrightly and openly refuse to accept the Constitution of Pakistan? Would all the Oryas and Abbasis out there write columns against the Laskhar Jhangvi (LeJ) and Sippa Sahaba (SSP) as well, for leading an open slaughter of minorities across the country and violating Pakistan’s constitutional guarantee to freedom of life, speech and religion?

The Oryas lament that Malala did not write “pbuh” after Prophet Muhammad’s (pbuh) name.

Writer Bina Shah explains this well on her online blog:

‘It is work of copy-editors and proofreaders to insert or remove that phrase or acronym, and if you know anything about the process of getting a book ready for publication at a large publishing house, you’d know that they prepare a style sheet that they use as a guide to make sure there is consistency with names, phrases, capitalisation of words, etc. Someone in the editing process probably decided that it would be simpler and easier for non-Muslim readers to see “the Prophet” without the PBUH added every time. This is a decision made based on the expected readership of the book, and while it may not be au courant with what we do in the Muslim world, it is ridiculous to blame this on Malala. Once a book enters the stage of proofs and production, it is out of the author’s hands.’

‘If you’re so worried about that, I urge you to say “salallau alehi wasalam” every time you see the word “Prophet” in Malala’s book (which really isn’t more than a handful of times), and indeed every time you hear it, such as when it is recited in the Azaan (call to prayer) five times a day.’

Ameer Ali Syed, well known Islamic writer and listed in the top 100 great Muslim leaders of the twentieth century under the category of ulema and jurists, authored the famous book on Prophet Muhammad (pbuh) – The Spirit of Islam. He has also left out the repeated mention of “pbuh” in his book. Is he also to be reprimanded?

The right-wing press has issues with no “pbuh” in Malala’s book but have no objection to the erasing of Muhammad’s (pbuh) name from Ahmadi mosques and buildings.

The Oryas and Abbasis are angry that Malala did not use the term “Quaid-e-Azam” for the founder of the nation. As explained above, the book is intended for a Western audience that does not understand the meaning of Quaid-e-Azam. Note how the biography of Quaid-e-Azam on the Government of Pakistan’s officially endorsed page uses Jinnah instead of “Quaid-e-Azam Muhammad Ali Jinnah” whenever the founder is mentioned.

Moreover, there are many darlings of the right-wing that have not used “Quaid-e-Azam” with Jinnah’s mention. Maulana Mazhar Ali Azhar, an Ahrar leader, comes to mind. He appealed to the people not to be misled by the slogans for Pakistan and even referred to Jinnah asKafir-i-Azam. Maulana Maududi asked Muslims not to vote for Jinnah and called Jinnah an immoral man. Would the Oryas and Abbasis have the moral courage to take on the clerics who had opposed Jinnah and Pakistan?

Malala and the Shias

The rightist pro-Taliban apologists demonstrate their lack of English comprehension skills over and again.

Malala writes in her book,

‘Every year Shias commemorate the killing of the Prophet’s grandson Hussein Ibn Ali at the battle of Karbala in the year 680 with a festival called Muharram.’

‘Our own founder, Jinnah, was a Shia.’

The Oryas and Abbasis object to the use of the word ‘festival’ for Muharram, claiming a festival is a joyous celebration or ‘mela’ in Urdu. Perhaps mandatory Arabic schooling would have been a better idea for them. Their English vocabulary is definitely not their forte. Here is a picture from Wikipedia’s main article on Muharram.

Since the objection is that the Shias are hurt by use of the word ‘festival’, I ask the Oryas and Abbasis why they are never hurt when the Shias are slaughtered in Hazara and other parts of the country at the hands of those they openly protect and who’s ideology they represent, namely the LeJ, the SSP and others like these organisations?

The attack on Malala’s book is based on hypocrisy, lies, deception and jealousy. It is based on phobia and a threat that a voice of sanity is overpowering the conventional narrative of the right-wing majority in Pakistan. The truth is being spoken out loud.

If the Oryas and Abbasis really love Pakistan, its Constitution and its people, they must start a fight against radicalisation and extremism in Pakistan. Otherwise, they will be remembered as hypocrites.

As for Malala, she survived the first attack. She will survive again!