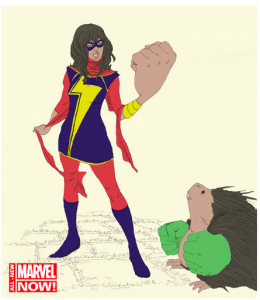 As a Muslim American and an avid comic book guy, I applaud Marvel for creating a Muslim heroine, code name Ms. Marvel. In a post-9/11 world, dealing with problems concerning Islamic and American identity is still real. Ms. Marvel shows that the two are not mutually exclusive. Her actions are not real, yet are a strong part of my reality.

As a proud Muslim American, I have taken part in Muslim-led walkathons, given blood at Muslim-led blood drives and picked up trash at Muslim-led highway cleanups. Not in some foreign country, but right here in my own America. I’m no hero, but it’s a start.