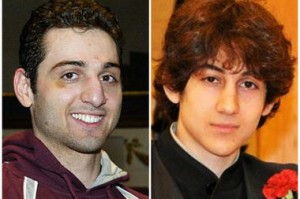 We have seen the pictures of the Tsarnaev brothers. We know their names, and we are learning facts about their lives – one a boxer, and the other a student. But we still don’t really know their identity.

And neither did the brothers, as they allegedly planted those bombs at the finish line of the Boston Marathonlast week.

Or at least, that’s what my experience as an immigrant tells me. What the Tsarnaev brothers very likely had was a jumbled-up mass of conflicted identities, making them vulnerable to militant religious ideology. You can wait for the FBI to release their complete psychological profiles to believe that they had a conflicted identity, but I won’t.

Because I had one.

Almost two decades ago, I, too, landed in America with components of a conflicted identity. Let’s see. Where should I start? Immigrant? Check. Muslim? Check. Young male? Check. Anti-war? Check. Socially isolated? Check.

But there was a key difference: I was taught from childhood that jihad in these times means a personal struggle, not a holy war. I belong to an organized and educated worldwide Muslim community that professes, “Love for all. Hatred for none.”

The Tsarnaev brothers didn’t appear to belong anywhere. Born with Chechen roots, raised inKyrgyzstan, Dagestan, and for the last decade in America, they wavered between various worlds.

In 2009, Tamerlan – the elder brother and an accomplished amateur boxer – hoped to compete for the US Olympic team. Last week, he was killed in a shootout with Boston police. In 2012, Dzhokhar – the younger brother and a college student – became a naturalized US citizen. Last Friday night, he was a captured traitor being transported to a hospital as jubilant residents ofWatertown, Mass., chanted “USA, USA.”

Officials say Dzhokhar has indicated the brothers acted from hard-line Islamic beliefs and anger over the US wars in Afghanistan and Iraq.  A tweet from Dzhokhar hinted at his feelings of alienation among even his fellow Muslims: “Brothers at the mosque either think I’m a convert or that I’m from Algeria or Syria, just the other day a guy asked me how I came to Islam.” Most Chechens are Muslims.

By juxtaposing the gruesome images of the “collateral damage” in Iraq, Afghanistan, and Palestinewith out-of-context verses from the Quran, they infuse such religious fervor that gradually a disillusioned man who didn’t have a single American friend – as Tamerlan once said – musters enough courage to make 300 million American enemies. He falls for the illusion of a cause, a community, and an identity.

Dzhokhar should go online from his hospital room to see how both brothers apparently gambled their lives over an illusion.

Despite his US citizenship, Dzhokhar has been typically described by the media as having Chechen roots – rather than as an American. The Chechen president was quick to remark, “They grew up in the USA, their viewpoints and beliefs were formed there.” So much for the roots.

A  Boston Muslim imam says he won’t lead Tameral’s funeral, because “he already left the fold of Islam” by killing innocents. So much for a Muslim identity. And many immigrants are happy that these two young immigrants didn’t belong to their ethnic group.

I am not making any excuses for the horrendous actions of the Tsarnaev brothers. As President Obama said, the “full weight of justice” should come to bear. I am just wondering how to break the trend of seemingly peaceful Muslim-Americans repeatedly morphing into explosive radicals.

For Muslims, blaming America for all the mayhem in the world is disingenuous. Whether at the pulpit or the dinner table, we must remind our children to remain thankful for the liberty and justice America offers us.

For authorities, the answer should not lie in the increased surveillance of Muslim communities, as is being suggested. Painting Islam as an inherently violent religion and all Muslims as suspects is a failed recipe.

The Muslim communities and law enforcement authorities must collaborate so that a new generation of Muslim Americans – or “Muslimericans” as I call them – is raised. This new generation would see no conflict between their pledge to the Quran and their Pledge of Allegiance. My community drilled this message so deeply into my mind that even though I disagree with certain US policies, it never compromises my loyalty to America.

Now under the banner of “Muslimerican,” I have shared this idea through outreach to mosques, college campuses, and media outlets. I air daily radio commentaries titled “Muslimerican” on a Fox News  affiliate.

The admirable performance of the local and federal law enforcement agencies last week, to me, signified the killing of one terrorist and the capture of another, but not the long-term closure for one nation.

Closure will come when the ideology of a violent jihad will be completely purged from the admired Muslim scholars who perpetrate and sanction it; when the concept of loyalty to a non-Muslim state will be preached in American mosques; and when American-Muslims will enjoy the same trust as other religious minorities.

That’s when Muslimericans will outgrow their hyphenated status and their true American identity will finally emerge.